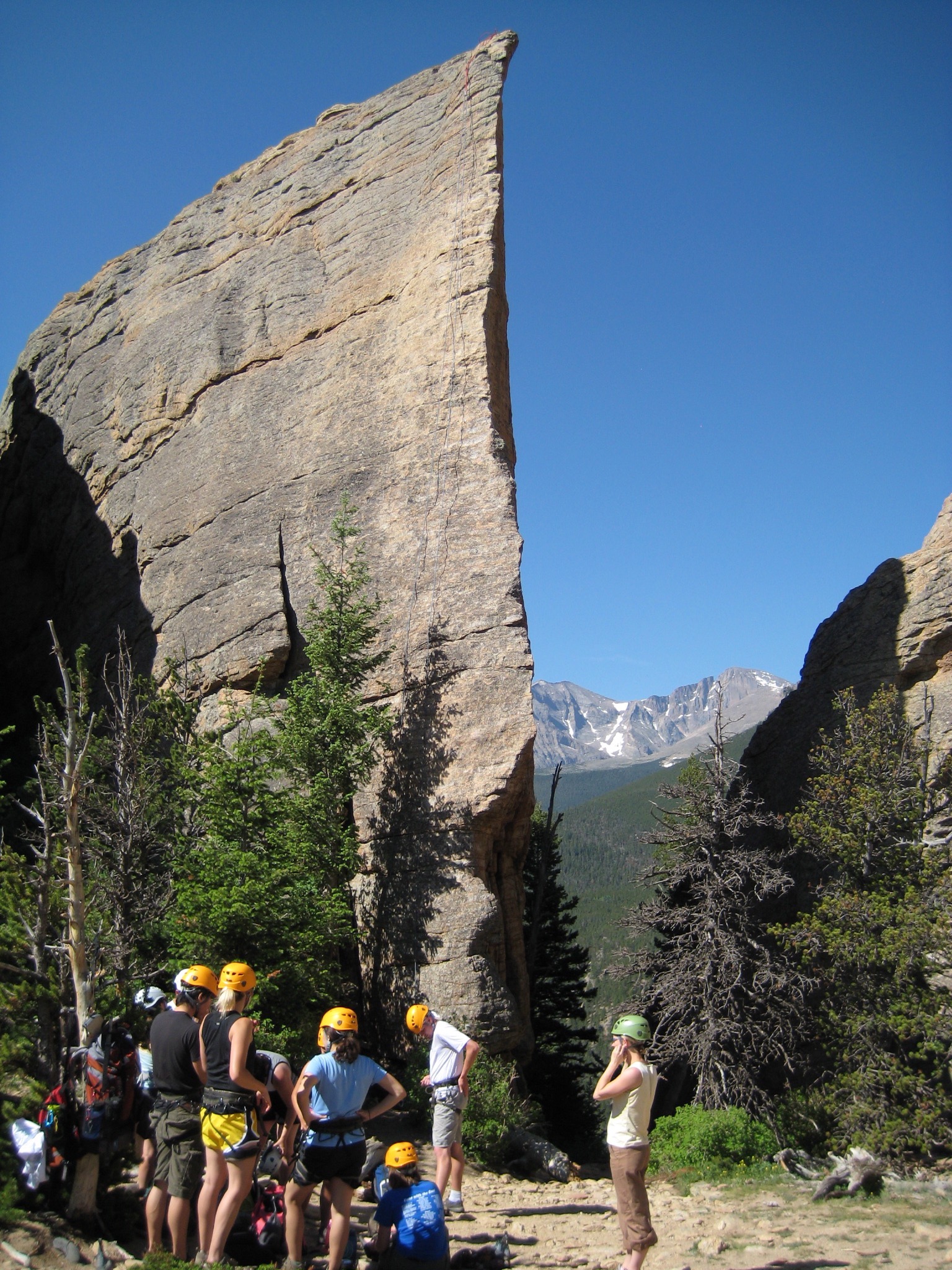 I was giddy as I huffed up the steep mountainside on the way to the climbing crag. Soon I would be at Jurassic Park.

At nearly 10,000 feet, there is no better scenic climbing crag in Colorado. The the views of Rocky Mountain National Park and Longs Peak are epic, and the rock climbs are enjoyable and varied. The Edge of Time is one of my go to favorites.

Mind you, this place has nothing to do with T-Rexes and overly redundant movie sequels (spoiler alert: the dinosaurs go crazy and start eating people and shut down the park—again).

I decided to go climbing here on a weekday in July. It had been awhile since I had been out (see my previous post “The Life of an Adventure Dad”) and I was eager to see some old friends who were in town.

We chose a Monday morning at 8 a.m., in hopes of skirting the crowds. Though, the thought seemed paranoid considering I’ve usually had the place to myself. But like anything good in the outdoors in Colorado, it is only a matter of time before it gets discovered. As the saying goes, “nothing attracts a crowd like a crowd.”

As we arrived at Index Toe and Middle Toe climbs to warm up, I could hear voices from farther up the path. As we listened closer, the cacophony of voices sounded more like an entire village than a small group.

We hiked farther for a closer look: a group of 20. In a short time, another group of 15 showed up, too.

But then two more guys came up. Then another three. Then three guys from Illinois. Then a couple with three kids—all wanting to climb. At least 50 people filled the small crag. Pretty soon I felt I was climbing in Movement Climbing Gym in Boulder.

It reminded me of the movie Three Amigos, when all the towns people dress up in costumes to resemble the three sequined heroes. “There’s too many of them El Guapo!” the bad guys said. “Now they are over here, too!”

There were Just. So. Many. People. How did this place get so crowded??
For one thing, when temperatures spike to nearly 100 degrees in Denver, Jurassic hits maybe be 80, though, the high altitude also makes it susceptible to thunderstorms. For another, The Edge of Time is an incredibly aesthetic climb that graces the cover of at least one popular guidebook. At 5-9, it is doable for most mortals (though it feels stiff for the grade to me) and people flock to it like moths to an incandescent.

Also note the proximity to Rocky Mountain National Park, which is a zoo in the summer.

The longer I have lived in the Front Range of Colorado, the more I feel it rapidly changing. Maybe something approaching—eeeeek, I hate to say it—California? The roads buzz with traffic, even during off-peak times. Climbing crags teem with people like Yosemite, even on weekdays. The costs of housing skyrockets exponentially, not to mention the demand and scarcity. Google is even moving an office here. Hmmm…

It’s on days like this when I want to rename the state: Colofornia, or even Calarado. Consider these stats: In 2014, Colorado was the 4th fastest growing state, adding 83,780 residents, according to the U.S. Census. Not only that, in 2013, 64.6 million tourists visited the state—an all time record. And the population growth continues to explode this year.

And can you blame people? Colorado is a great state, though, I wish it were as densely populated as Wyoming. Keep in mind my grid is growing up in one of the least populated states in the country; I also went to college in Montana. I remember Missoula, at 90,000 people, feeling crowded.

Back to my climbing day at Jurassic, it would have been easy to be annoyed with the crowds. But I didn’t care. Considering I’ve spent the past 3-4 weeks answering to a crying baby (don’t get me wrong, I love my daughter and I would never go back to life without her!) getting out for a change was REALLY nice. I felt so free. When my friends balked at leading a climb, I quickly jumped on the sharp end. “Eh, someone needs to set this up before more people come, so I might as well…”  I got on The Edge, along with two other climbs and along with a gymnastic 5-10. All in all, a pretty good day.

And while I am sometimes annoyed by my state’s Coloforniacation, in reality, it has a LONG way to go before it becomes a California. In the end, I am very thankful to be in Colorado. After all, places like Jurassic are only a mere 55 minutes from my house!

When the day comes when thing do get too crazy here, there is always Montana. Or maybe even Alaska. I often remind my Colorado-native wife of this fact. 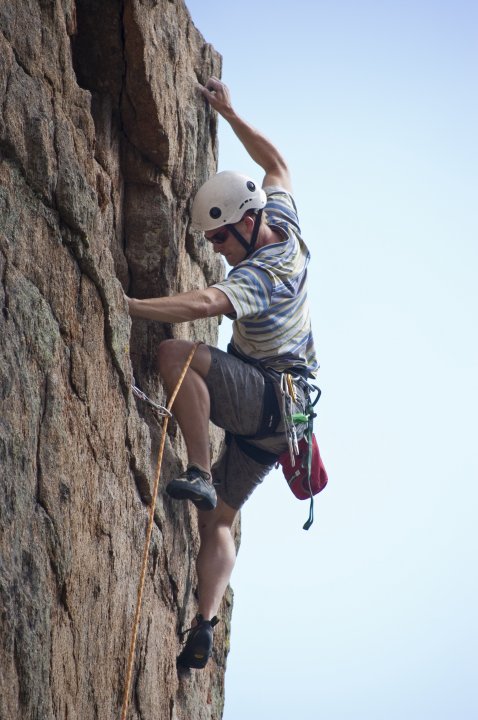 Me climbing on a far less crowded day a few years ago. Photo: Ted Wilcox. 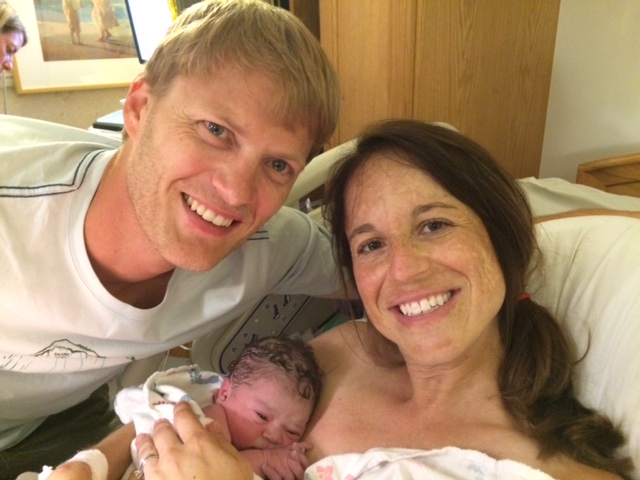 I got a serious life upgrade recently: Fatherhood.

Add the titles of “Dad” and “Father” to husband, writer, adventurer, guide, etc.—but this one casts me into a completely different category fresh and fraught with life changes. I say, bring it on.

Pippa was born at 4:54 p.m. on Tuesday June 30, a fast and furious entrance into the world. My wife got a haircut at noon, came home at 2:30, and by 3:30 I rushed her to the hospital, where they quickly admitted us to a room. Considering Pippa wasn’t supposed to come until July 12, it was a bit of a shock. I hated seeing my wife in that much pain (there was no time for pain meds), but she was a champ and the joy afterward has now overshadowed those terrible hours.

Pippa weighed 6 pounds, 8 ounces when she was born. My wife and I named her after re-reading Pippi Longstocking, the story of the fiery red-headed girl that seems so full of spirit and fun. We imagined that our little Pip would be like that in some ways, and so we chose the British counterpart, “Pippa.” The name is uncommon in the U.S. but is a little bit more common in the U.K.

Back to my title upgrade, technically, I’m already a dad to my stillborn son, Elliott, who died 7 months along last summer. But, certainly fatherhood feels a little more real when the baby cries and wakes you up in the middle of the night.

Now with Pippa here, I’d like to add a more specific title to my list: “Adventure Dad,” for, I hope to be the type of father who takes her on adventures. Especially since Elizabeth and I live in Colorado and already enjoy it so much, I see this as somewhat of an inevitability.

Lately, I have been a lot more aware when I have seen dads with daughters. For I knew I soon would enter that world. I remember hiking Mount Senitas near Boulder, watching dads with toddlers in backpacks or dads hiking with their teenage daughters on the way up. I wanted in on that world, and now it is finally here.

I know it may be awhile before Pippa will be ready for adventures, other than being schlepped in a backpack for awhile. But having a lifetime of that to look forward to is very fun.

To be fair, I don’t know how much she will like the outdoors. I hope she will at least like skiing and rock climbing a little—for her old man’s sake 🙂 I look forward to getting know who she is and find out what this little girl likes.

There is an obvious paradox of the outdoor lifestyle as it relates to kids. Children take up time and so do outdoor sports—obviously one will have to give. But that is a sacrifice I am willing to make and have thought a lot about. I can’t imagine a much better use of my time and life than being a good dad to Pippa.

Of course, last night’s crying murdered my sleep. But my perspective has changed from just, “I” had a bad night to Pip had a good night (she actually fed well and slept decent), so in reality my night was pretty good, too.

My days are even better as I have so much to look forward to with her in my life.

Here we go Fatherhood. What an incredible life upgrade.

P.S. I snuck in a sprint triathlon on Sunday: The Boulder Sunrise. Had I known Pip was coming just 2 days later, I might have held off—though it may be awhile before I return to such pursuits.

P.P.S. This post was written on July 2. Not sure why it keeps saying July 3.