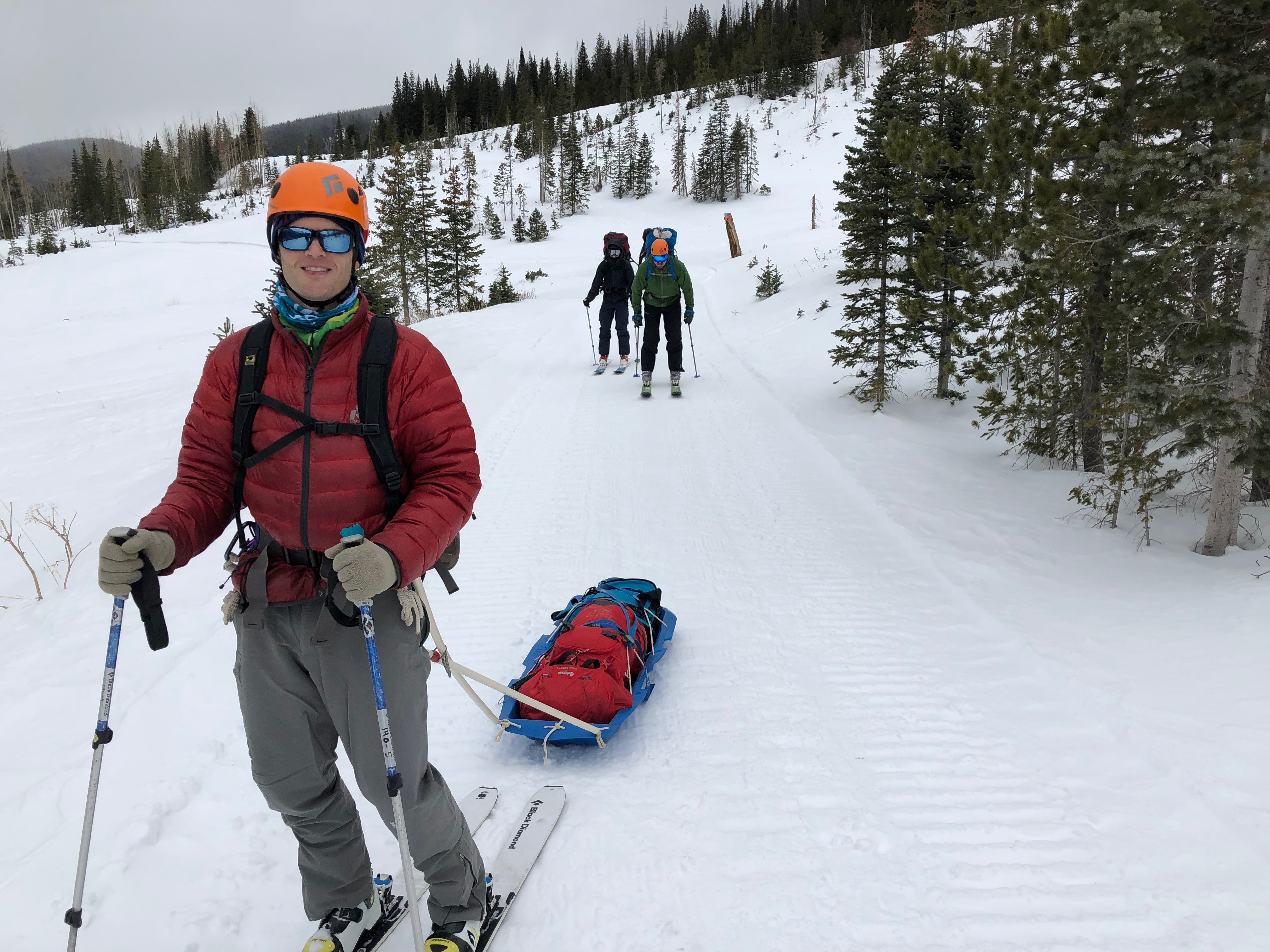 As I shuffled my skis uphill through more than a foot of fresh powder in the northern Colorado backcountry, I couldn’t help thinking, man, I have missed this! Soon we would enjoy the reward: descending the lines we ascended. Such is backcountry skiing—significant investment, significant reward.

In mid December, I ventured on an unexpected yurt trip in northern Colorado. After a great early season across the state, it was an easy trip to say yes to when I got the invite.

When I say yurt trip, I mean where one skis into a round felt-covered shelter in the wilderness, carrying gear and food in backpacks and sleds. This would be my third of such trips to this area, though this year we would technically be staying in a “hut”—the Nokhu Hut—more like small cabin. Plush with rustic charm, yurts and huts are typically heated by a wood burning stove, furnished with bunk beds, and a tiny kitchen.

For me, this trip was much needed. After a grueling fall of building a website (hopehasarrived.com), I was ready for a break. I became justifiably stoked about the prospect of backcountry skiing—especially since it had been a few years.

While I have skied a fair amount the past couple years, it was mostly in bounds and some skinning at the small ski area, near where I currently live, sans beacon. I had not ventured into the backcountry since early 2016, before my health trial began. I’m much better place now, but lack of mountain proximity and fitness have delayed this from happening. Until now.

So, that’s how I found myself skinning through the Never Summer Mountains with a sled filled with gear and food. The name comes from Arapaho Indian name, Ni-chebe-chii, which translates to Never No Summer, and when you venture through them in winter, it’s easy to appreciate why.

Indeed, Cameron Pass had well over 40 inches on the ground and even more higher up. More was coming, too—slanting streams of white flakes buffeted our faces as we ascended the trail. The approach to the hut was —only about 1.1 miles—though mostly uphill. After an hour or so, we reached the turn off.

When we reached the hut, not surprisingly the little shelter and woodshed were blanketed by a two-foot pillows on top and piles of white on the sides. We soon went inside and lit a well-deserved fire. 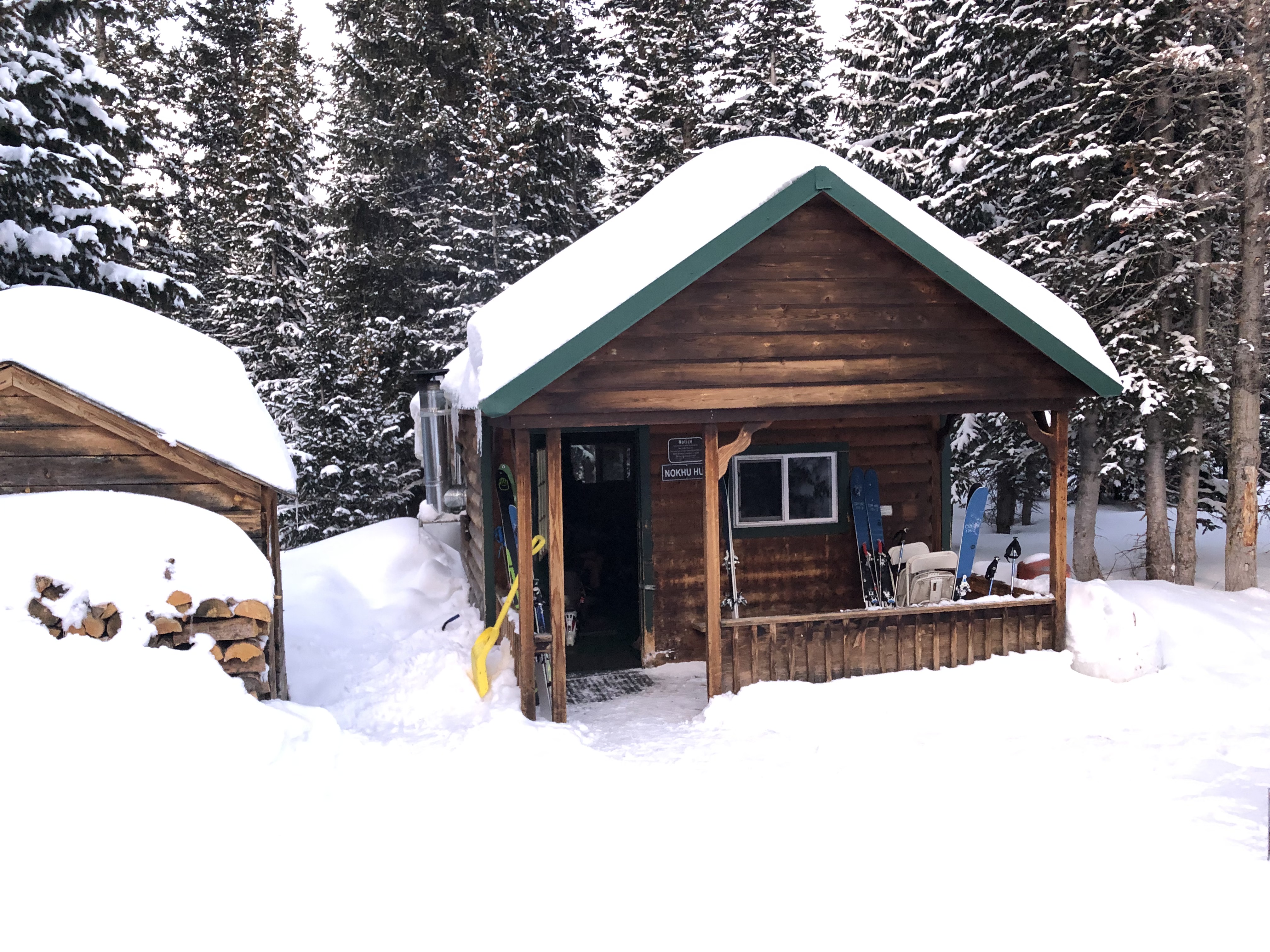 After a short rest, we explored the area east of the cabin and found a small glade worthy of a few ski turns. It was a great warm up, but tomorrow we hoped we find something a little more substantial.

That night, it kept snowing and snowing.

Meanwhile, inside our hut, we underestimated the heating capacity of the wood-burning stove and especially the insulation. Unlike the yurts, keeping the fire going overnight was completely unnecessary. I sat in the top bunk sweating like a beach goer in southern Florida in August. After an hour of no sleep, I crept out of my bed, opened the door and sat there cooling in the wind and snow. I quickly learned I wasn’t the only one overheating. One by one, everybody else got up and did the same thing. Maybe we should change the name to Never Sleep Hut or Forever Sweaty?

The next day, we woke up to the Colorado bluebird special: more than a foot of fresh powder, zero wind and a clear sky overhead. We then noticed what we couldn’t see when it was snowing—the prominent spires overshadowing our hut called the Nokhu Crags, which means Eagle’s Nest and is a stunning feature to say the least. 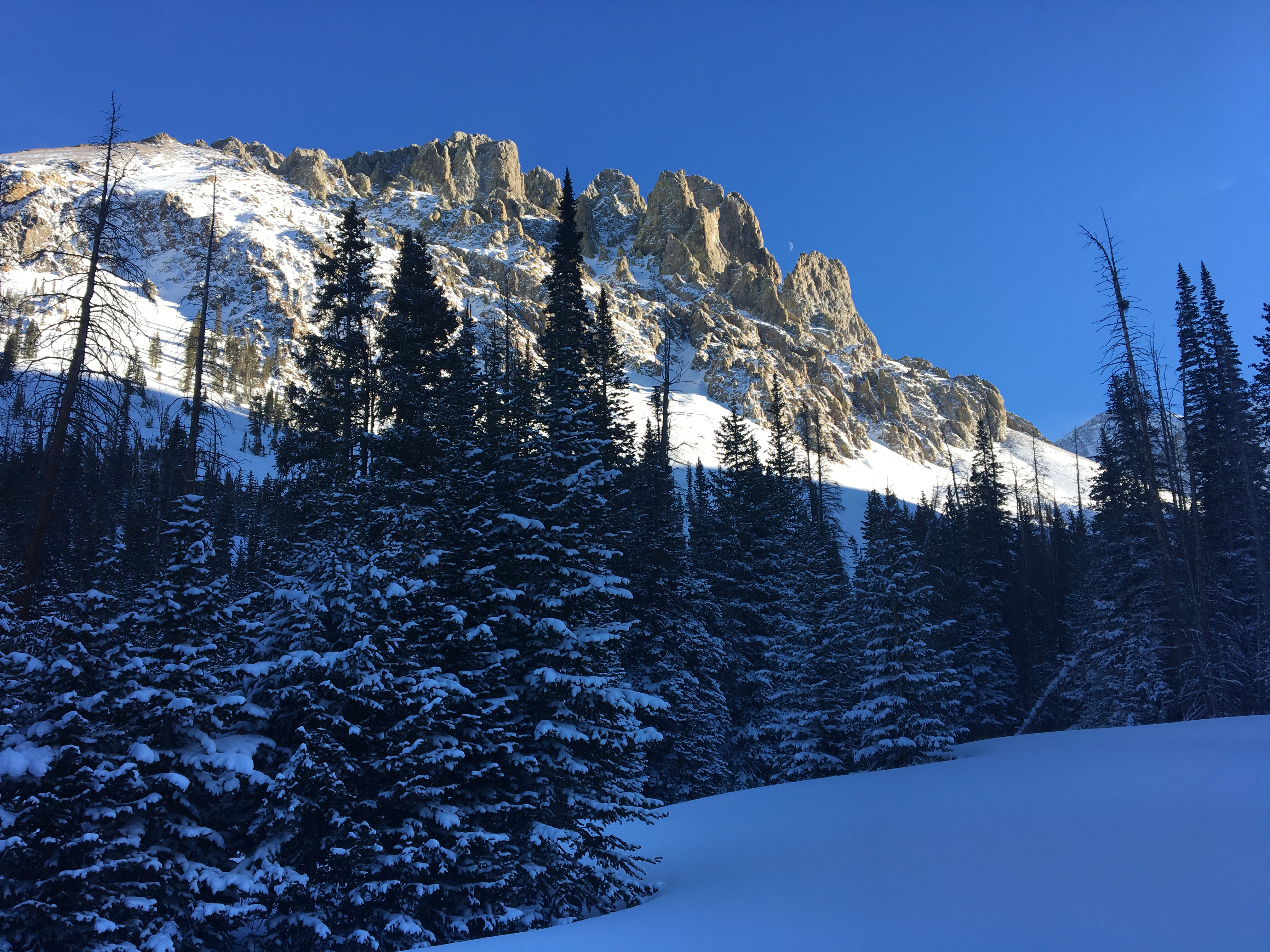 Soon we set off to explore the Lake Agnes area. With the fresh snow, the jaunt turned out to be calorie-zapping affair, as breaking trail often requires double the effort of just following someone else’s tracks.

When we reached the lake, the peaks surrounding the lake were majestic but foreboding. Though they promised a buffet of steep ski line delicacies, we were wise to look but not taste. Colorado boasts one of the most dangerous snowpacks in the U.S. and I anticipate the Never Summer snowpack was “considerable” danger based on my observations and recent snowfall. Generally in Colorado it is smart to stick to low angle terrain until the snowpack settles in the spring—even late spring. That’s essentially the message you will hear in any avalanche course you take in the Centennial State. 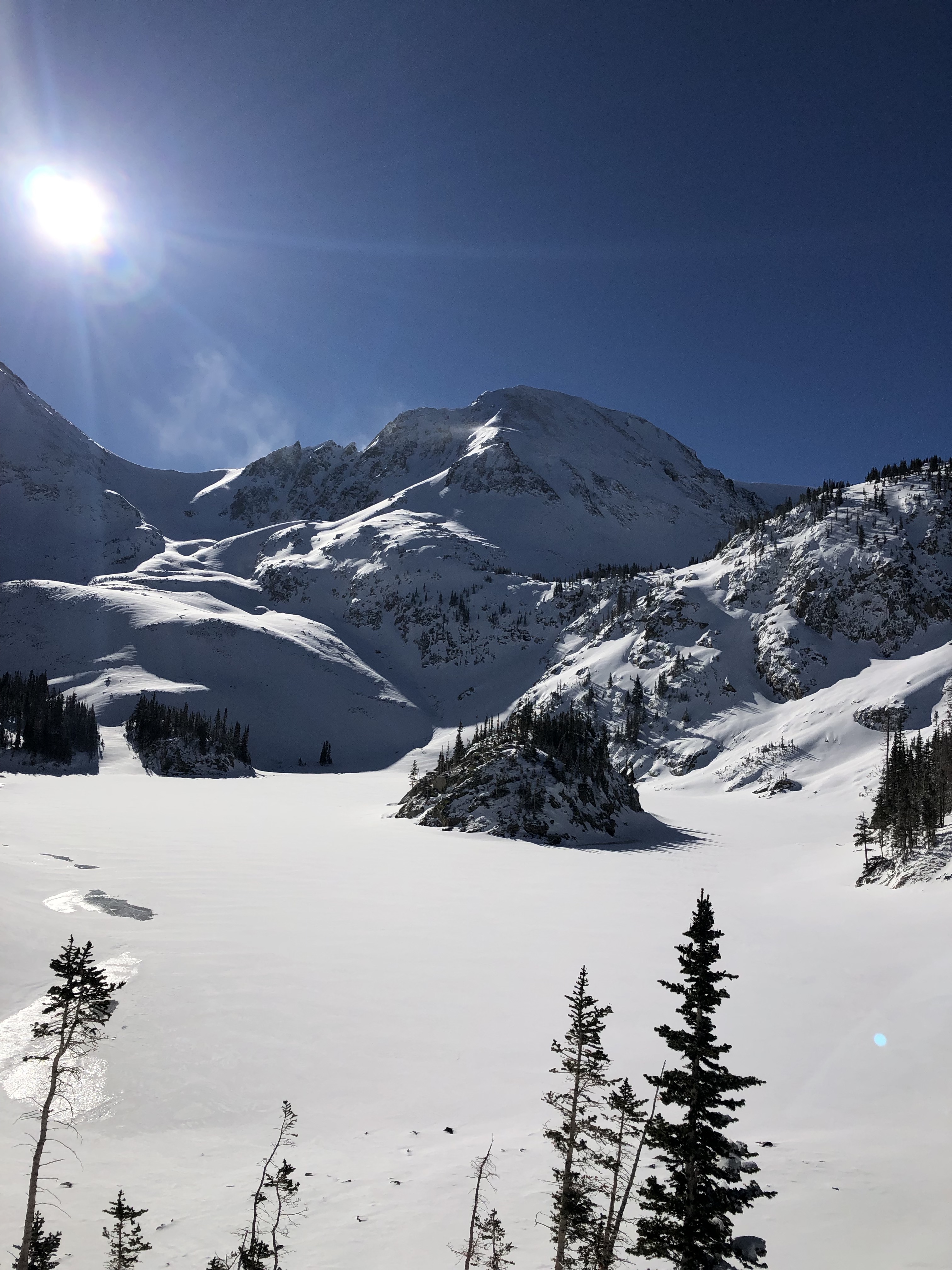 Unfortunately, we found it difficult to access the terrain we wanted from the lake, so we descended the way we came, and then another buddy and I ascended a different run of trees. Here we found the goods, the area most people referenced in the journals in the hut, though they never quite spelled out how to get to. The work was well worth the pay off. Not exactly your steep black diamond run—more like a green or easy blue—but with deep untouched snow. Maybe even two feet deep. Wow.

Later that night, we scarfed an epic meal of quinoa spinach and turkey—thanks Adam and Nate. We also played cards and enjoyed the typical high jinx and stories of good friends who know each other well. Indeed, this was the best part of the whole experience.

Besides the social part, I was just stoked to be in the backcountry again. Not only did this blog finally get some fresh content related to the original subject, but I felt a part of me come alive that has been dormant. I also had more strength and energy than I was expecting, especially coming from low altitude. As my health continues to improve, so does my energy. A month or so ago, upon a doctor’s advice I stopped taking a medication that affects aerobic output. For the first time in a few years, it felt like they took the governor off and I was back to normal, or at least close.

The last morning, I got up at 6 a.m. to ski one last lap. I couldn’t rouse any companions so it was just me and God and the mountains. On the low angle slope, the sun rose over the peaks and the silent snow. I wanted to sit there for a long time, but the cold and the reality of a plane to catch forced me to keep it brief. But I was thankful to God for such a great morning and the hope of more adventures soon.

Indeed, now that I have returned to the backcountry, I’m ready for more. 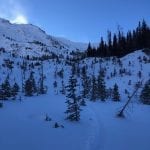 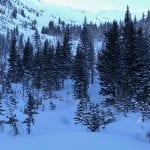 This is part of the low-angle glade we skiied. Much better than the photo looks! 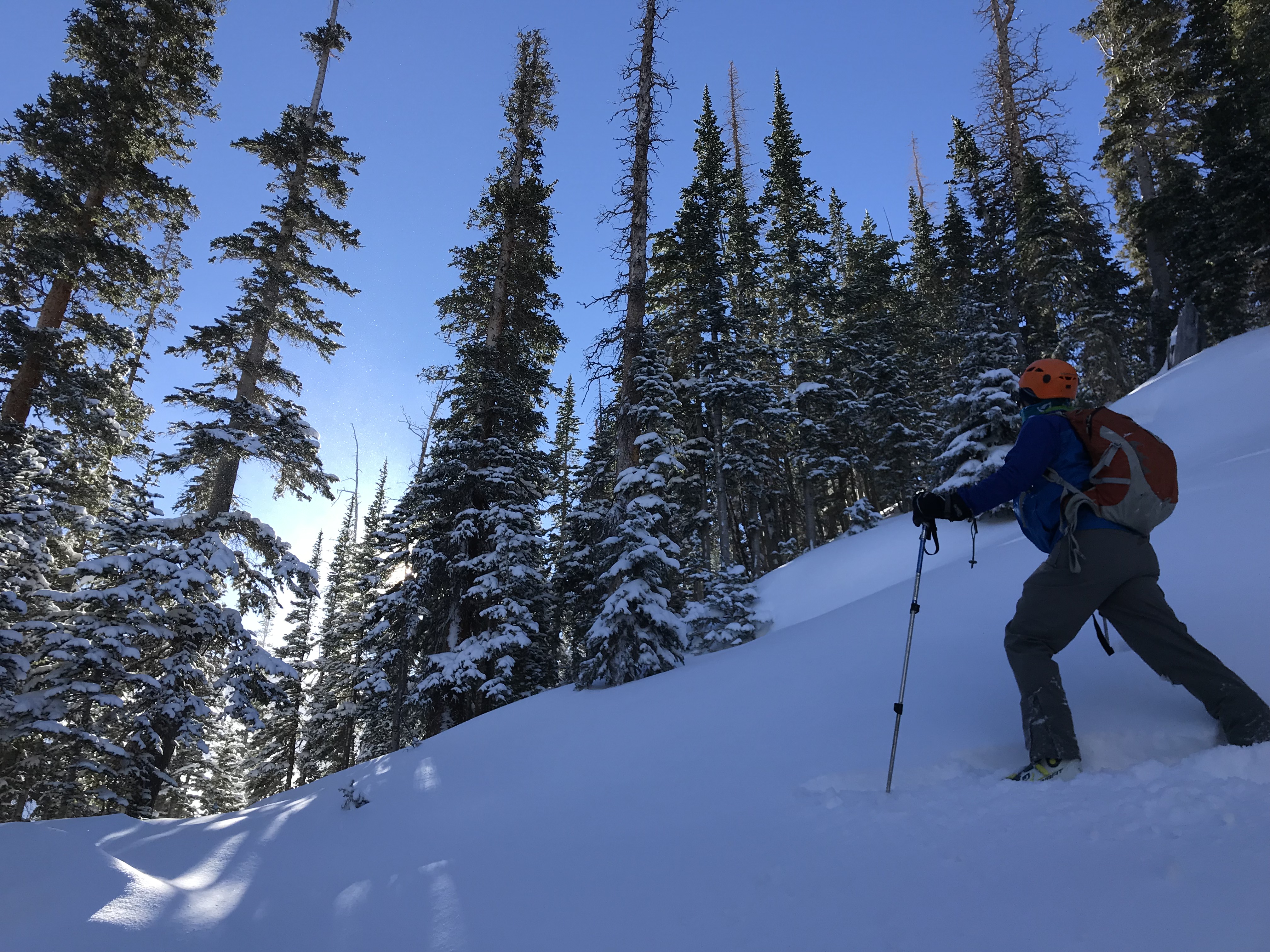