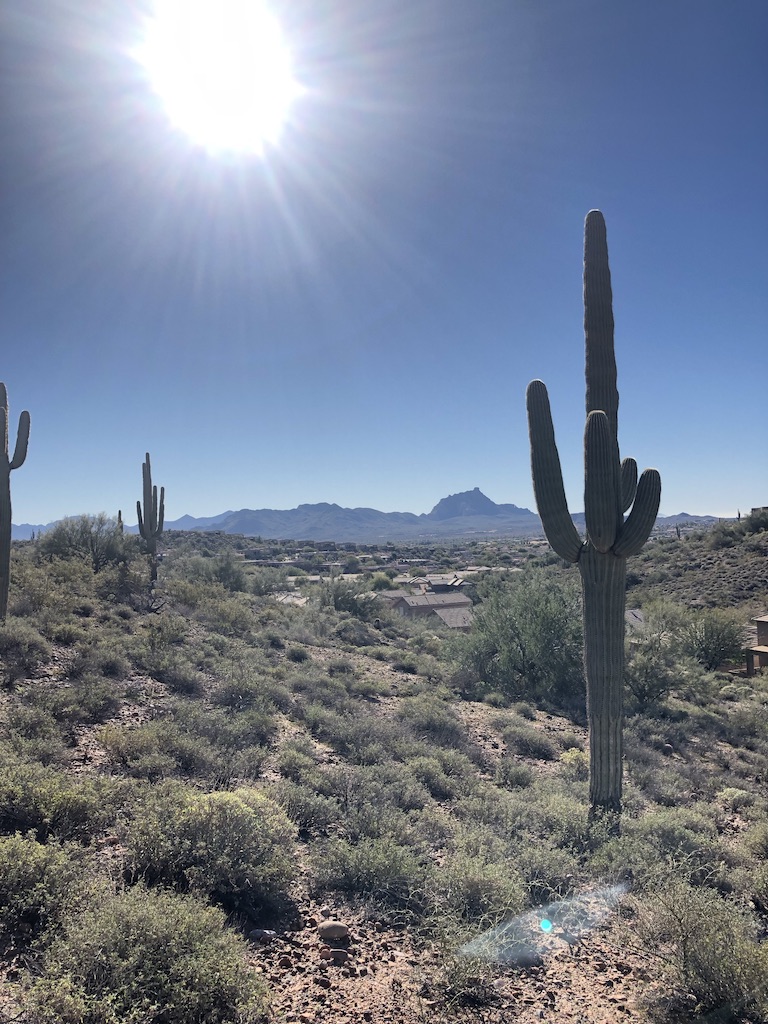 I could hear the crunch crunch of my footsteps in the dry, desert gravel as I passed several Saguaro cacti, some up to 20 feet tall, with spiny arms curving upward—like a southwestern salute. With zero wind and clear cerulean sky overhead, the temperatures hovered at a pleasant 65 degrees.

Not too shabby for middle of winter.

In early January, we escaped the cold and ventured to the Phoenix-area with family. Neither Elizabeth or I had explored Arizona much, except for a quick trip to the Grand Canyon when we were first married.

Doing my homework ahead of time, the rock climbing and hiking seemed the best soup de jour. The mountain biking intrigued me, but renting seemed overly complicated and cost prohibitive. So, we schlepped our hiking and climbing gear via bulging backpack on the plane as a “personal item,” no doubt stretching that definition to the limit.

Here’s a few adventure highlights from our trip.

The Crowds of Camelback

On our second day, we headed to Camelback Mountain, a popular hike in the middle of Scottsdale that seemed like Phoenix’s version of the Manitou Incline near Colorado Springs, or Mount Sanitas in Boulder (see my chart at the end of this article).

It’s probably a fair comparison, though more crowded and more urban than the Colorado counterparts. Indeed, the website warned, “Parking is a challenge, please plan accordingly.”

What an understatement. On a Thursday afternoon, scarcity forced us to park a mile away from Cholla Trailhead—practically in a different zip code. There is also another trailhead on the Echo side, but I heard getting a spot there is even worse.

Such is the plight of the urban outdoorsman. 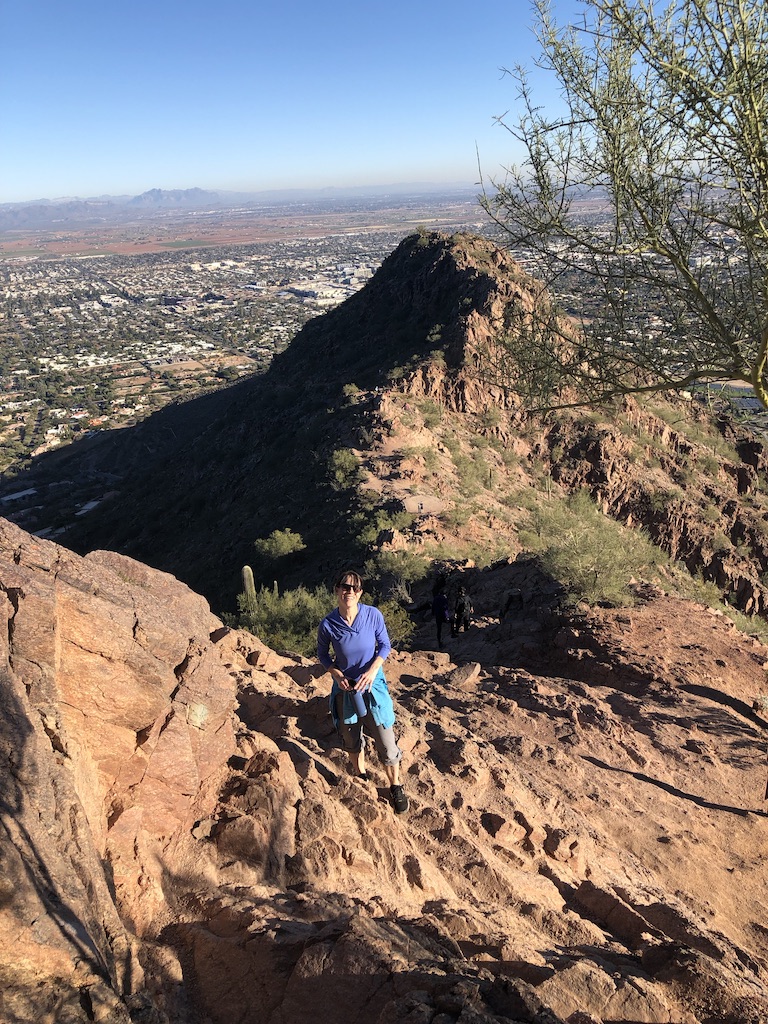 On the approach and once on the trail, we dodged people like we were waiting in line for a funnel cake at the state fair—steady lines for at least the first third of the hike. It took about 40-45 minutes to ascend the 1.42 miles + bonus mile to the summit (which we shared with about 60 people) and about the same to get down.

Despite the crowds, Camelback proved enjoyable, both aerobically and scenically. If I lived locally, I would partake often. Though, I don’t think I could handle the hot months, considering the city averages 107 days above 100 degrees Fahrenheit! That sounds like living on Mars.

A few days later, we decided to sample the local rock climbing, ironically ending up on the other side of Camelback. This time, trying to find a parking spot at the Echo Trailhead proved impossible. So we caught a Lyft from an uncomfortably “happy” driver (420 perhaps?) at a grocery store a few miles away.

The rock climbing at Camelback is also popular, considering it is the closest to the city and features mostly sport. Though, I quickly found while these walls looked good from far away, they were concerning up close. The Mountain Project description of the area seemed fitting: “Sort of a desert conglomeration that has been described as ‘petrified mud.’”

Indeed, the 200-foot climb I had on my list included this sober warning “The holds are fairly stable but climb softly anyways.”

Um…so how is rock “fairly stable”? And how does one “climb softly”? That phrase threw me. I’m guessing the author probably meant to “pull down not out,” like the familiar climbing adage. But climbing “softly” almost seems to imply you reduce your body weight—which is impossible apart from levitation. 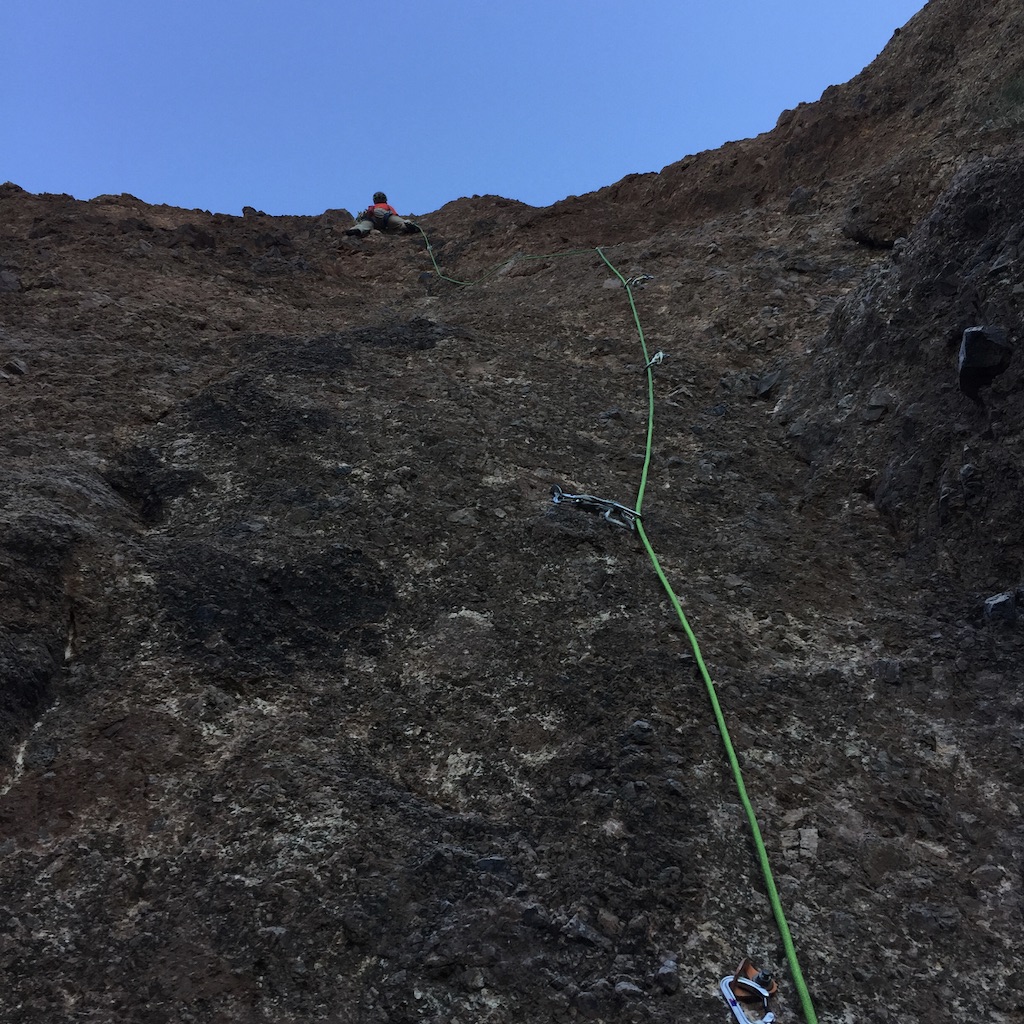 I decided to climb anyway, while vowing to be cautious. Yet, in rock climbing I’ve often found the fun factor directly varies proportionally to the rock quality. The less bomber, the less fun. The more bomber rock, the more fun. I’ve learned this truth the hard way—from crumbly Utah sandstone to chossy Colorado climbs.

I suppose the downside of currently living in a place with limited rock climbing, is when I visit places I’m often overly motivated—even if it pushes common sense a bit.

And, so I started ascending a route with a big water streak called, Donamatrix (I couldn’t find much about the name origin). After I had clipped into some shiny bolts, I felt a bit better. I was especially thankful we were wearing helmets.

The rock type was strange—kind of a combo between river rock and sharp rocks with some kind of concrete layer—the “petrified mud” I assumed. As I climbed about 30 feet off the deck, it was easy to fixate on the loose pieces and gaping holes where rocks used to be. 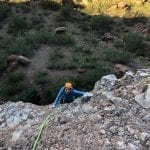 Fortunately, no rocks came off the first pitch, but I am thankful it was no harder than 5-8+. I think anything more difficult would have been zero fun. I’d rather be challenged by my ability to hang on to the holds, then the integrity of the holds themselves being the adventure.

The second pitch was a little more solid, and on top, we saw great views of the rest of Camelback and Scottsdale, especially with twilight approaching. Soon we rapped and we were happy to reach the ground in one piece, while not bringing any bowling balls or baseball-sized chunks on top of us. 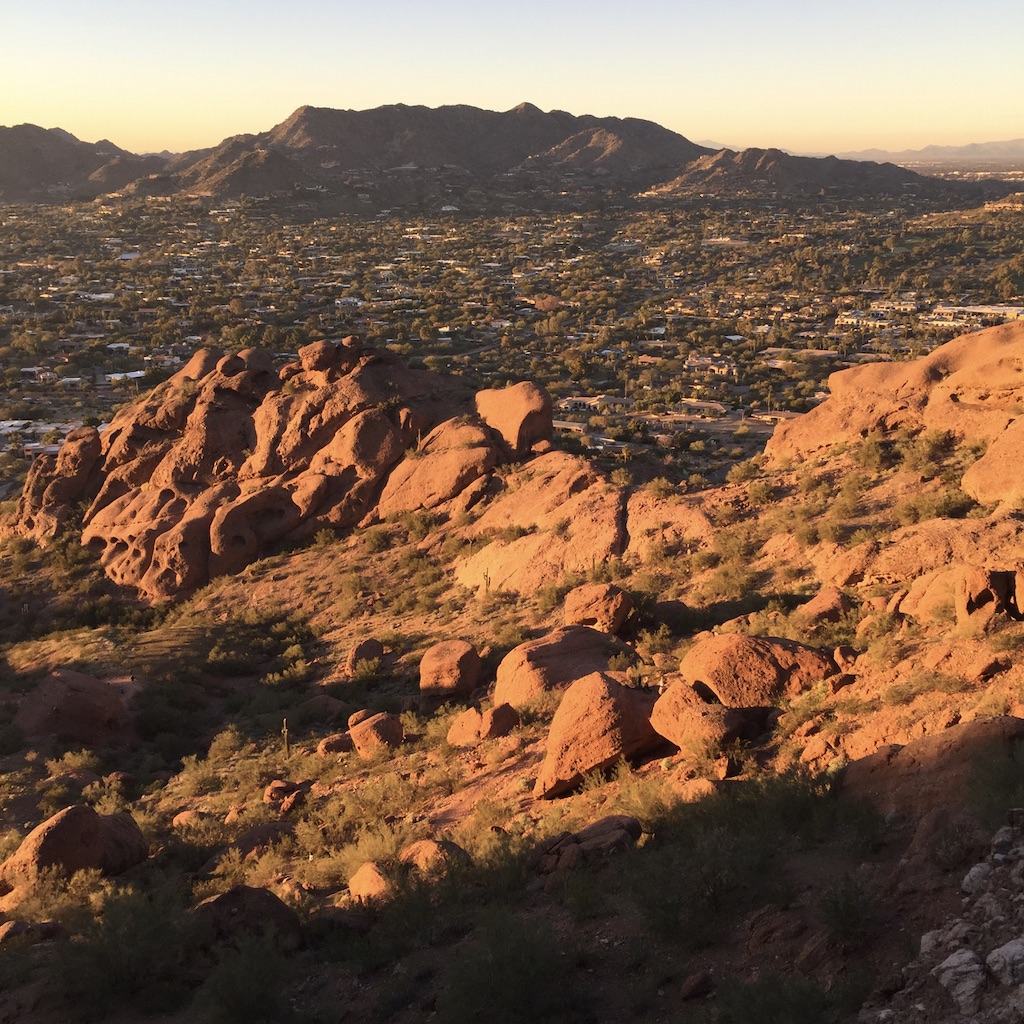 While I was thankful we did the route, I probably wouldn’t return to Camelback—unless hiking. While I’ve enjoyed climbing on softer rock in epic locations, like in Fisher Towers or Garden of the Gods, Camelback lacked such charm.

No disrespect to climbers who like this place, but for me, just because “it’s there,” doesn’t mean I’m that stoked to climb it again. 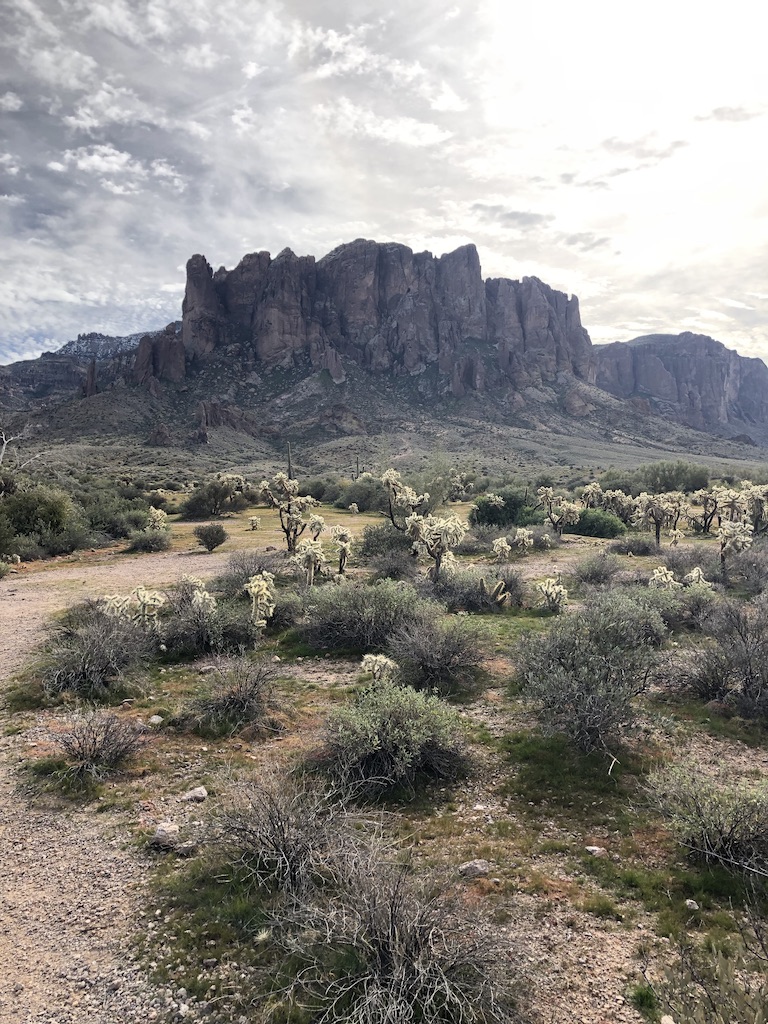 One of my favorite outings in the area, was hiking a 3.5-mile loop in Lost Dutchman State Park. We did this more as a family adventure, with our daughter and my mom along, too.

This park sits in the thick of the Superstition Mountains, which besides the extremely rad name, feature a collection of steep walls and mesas, with huge saguaros and other cacti as the foreground—very southwestern in feel.

These mountains look and feel rugged—they are known for sharp drop offs, deep canyons, extreme changes in weather, harsh winds and dangerous wildlife. Today, they comprise more than 242 square miles of wilderness. They were named by the Pima Indians, who passed on stories of strange sounds, mysterious disappearances and deaths related to the mountains. 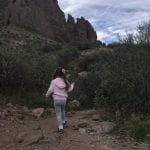 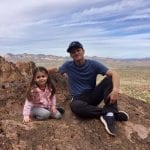 Indeed, legend lives on today as there have been plenty of hikers who have disappeared in them throughout the years.

Before coming to Phoenix, I had read that the “Supes” contain some of the best rock climbing in the state, other than Sedona or Flagstaff area. I wish we would have had more time to explore such places as Queen Canyon. Next time. 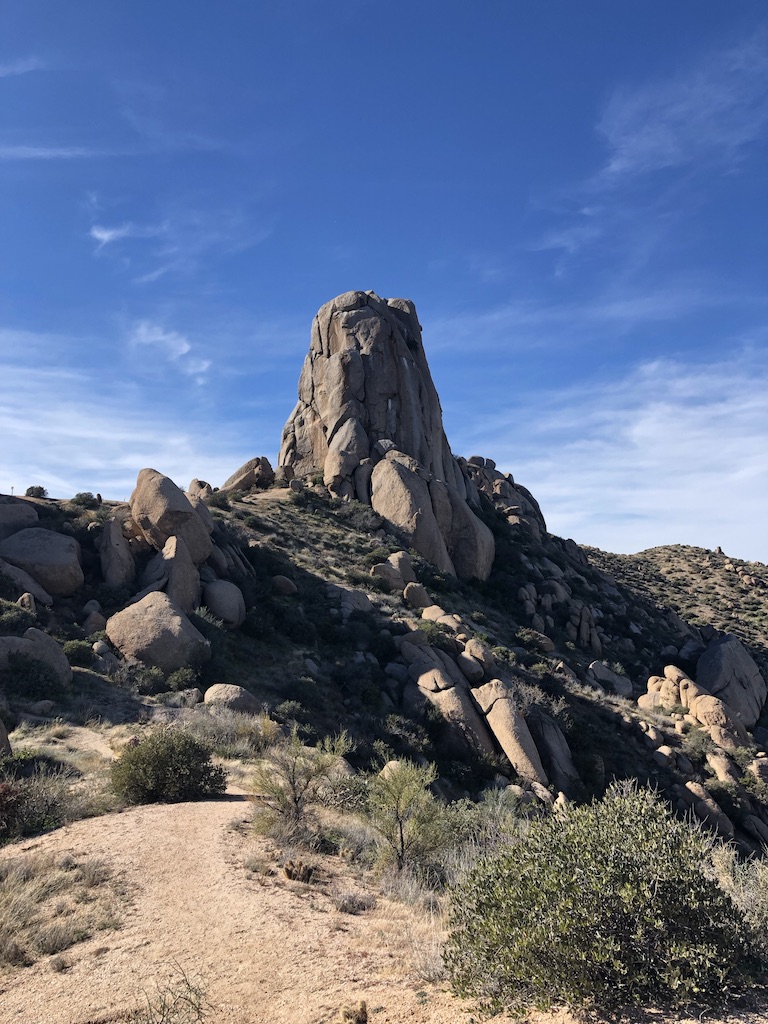 A little closer to our base camp, we climbed at an area called Tom’s Thumb, in the nearby McDowell Mountains. This time the rock would be supremely solid—desert granite. No more mud.

We set out to climb a wall called Hanging Gardens, which was surprisingly tall, with routes up to three pitches (350 feet), and almost all of them traditional, the kind where you have to place your own gear using cracks and trees, and other features. The route we had had sought to climb received four stars—the highest rating on mountain project.

The approach was a few miles uphill, which kind of squeezed our daylight window considering we didn’t start until around noon.

When we arrived at the wall, I was surprised to find out how wet the rock was. It had rained a few days ago, but after 24 hours of drying, I figured it would be good to go in such a dry place. But this wall was north facing (a key fact which Mountain Project failed to mention) and so it would have been slippery and cold.

So, we moved on to a sun-facing route on the Thumb, which I had hoped to climb after the Garden Wall.

The West Corner started on a grassy shelf of sorts. We linked the two pitches together, climbing fast. After ascending a corner with a few trees, and then a chimney, I bypassed a small roof, and stood on top. Looking to the north and east, I could see deep into the Superstition Mountains. This felt much more like wilderness, compared to our urban adventures. 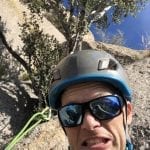 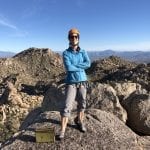 Sitting on top of the Thumb in the sun, soaking in the last hour of vitamin D, I couldn’t help thinking of how it might be awhile before I adventure in temperatures like this again.

Sure enough, as I write this from my northern locale, it was a balmy -9 degrees Fahrenheit that “feels like -24.”

At this point, I must thank our sponsors—my parents. They invited us to join them on this trip and they watched our daughter on several of the days so we could get a few adventures in—which was a win for us, and also for our daughter who loves spending time with them.

Anyone with kids knows it’s nice just to be able to get out at all, as adventures are often a side benefit on such trips. So, with that in mind, we were pretty content with what we were able to do.

I also discovered I am enamored with cactuses—especially the saguaros. I read that the big ones with curving arms could be at least 100 years old—that it takes at least 25-50 years before they can even grow a curve. So, that means a lot of these old cacti were probably around when Wyatt Earp and other old West characters passed through the area.

At any rate, I’d like to return to Arizona for some more adventures—especially climbing in Sedona, or the Grand Canyon again. That’s more of a wish than something we have actual plans for at this point.

Oh, and here is my Comparison Chart of the three hikes I mentioned: 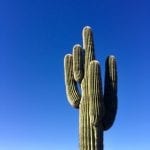 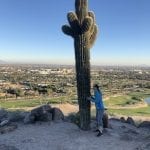