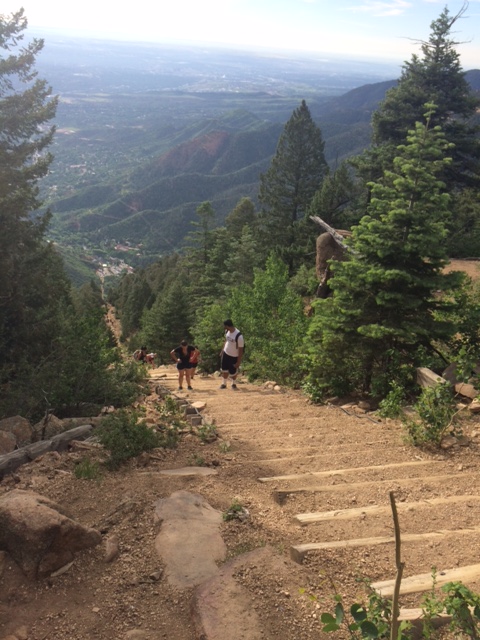 I awoke early on Father’s Day for an ascent of the Incline. This steep hiking trail, near Manitou Springs, gains more than 2,000 feet in about a mile up wooden steps and railroad ties. Think of one huge massive set of stairs that rises to the sky. Also think of a set of stairs that is littered with trains of people—especially in the summer.

Even starting at about 7:10 a.m., I was amazed at the crowds—probably a good 200 or so people. Not to mention the summer heat, as this hike faces east and gets the sun very early.

Several years ago, I would never have believed it if you had me how popular this trail would be today. People from all walks of life hike it, from Olympic athletes to tourists from Kansas. There is a whole nerdy record side to it, including who has logged the fastest time, etc. There is even one guy who hiked it 22 times in a row, gaining more than 44,000 feet in the outing—not to mention some really sore knees.

I appreciate the vibe of people motivating others to work out and keep challenging themselves. When Elizabeth and I lived in Colorado Springs, I would try to hike this at least once per month.

However, popularity certainly has a downside, including the difficulty of finding a parking place (you can take a shuttle, but it will add at least an extra 45 minutes on to your outing).

On most summer days, you probably have a better chance of finding a “snipe” or buying a house in Boulder County than you do finding a parking space. Though, this Father’s Day morning I found one in only a few minutes in the $5 section. “Wow, you got really lucky,” a girl told me when I got out of my car.

Dealing with crowds on the way up has its own sets of challenges, especially if you are going for a PR. I’ve probably hiked this thing 20 times, and here are some categories for what I have experienced:

Never See Em Agains. People hike at different speeds on the Incline and of course there are some crazy fast people out there that will pass you so quickly you feel like a Mack truck just blew by you at 70 MPH, leaving you shaking and unsettled. You will not see them again most likely, because by the time you arrive at the top they will be on their way down. At least you can thank them for the small breeze they kicked up, albeit often smelly.

Step to the Siders Some people politely step to the side when you hike up near them to let you pass. This is a very courteous and friendly gesture, but unnecessary as the burden of passing should be on the passer.

Flash in the Panners These are hikers who have stopped to take a break, but when they see you barreling toward them, they quickly step in front of you to keep hiking. Forgetting why they took the break in the first place, they try to keep a pace that is unsustainable and eventually resume the previous position.

Tailgators/Pursuers These hikers, when passed, have their competitiveness incited and put on overdrive and chase you like a mad hornet, occasionally all the way to top of the incline! Though, more often than not, their fate is that of Flash of the Panners and they burn out and fade away quickly like the 90s band Third Eye Blind. Though sometimes entertaining, these hikers can be a real nuisance.

Early Shifters (No See Ums) Wisely, many of the fastest and record-setting Incliners hike in the morning. As I found out today, even 7 a.m. is not early enough for a cool ascent because of the east facing aspect of the hike. You did not see these Spartan athletes, and maybe you never will.

Step Step Panters The Incline is hard. It has never felt easy for me, not even once. And the same is true for a lot of people, who fall into the rhythm of a high altitude mountaineer’s pace, step, step, pant…pant…pant. step, step….pant, pant, pant. While this may seem unnecessary, remember that not everyone who hikes the Incline attempts many athletic endeavors, besides the occasional ascent of the Incline.

On a more serious note, this morning I was thinking a lot about Father’s Day. I am grateful for my dad, as well as my two grandpas (who are both still alive amazingly). My dad’s dad is 93 and does not take any medication! If I am fortunate to have his genes, I could be around for awhile! I also want to say more about my Dad, who is such a great man and a great guy. I would not be half the person I am today without his wisdom, guidance and love. I also am thankful for my brother, who is such a great dad to his daughter and son. I really admire him for that.

This morning, I also thought a lot about my son, Elliott. My wife and I lost him last summer in early July. He was only 7 months old, and was unexpectedly stillborn. I have felt his loss profoundly the past year.

I must admit, I felt a deep sadness for him this morning on Father’s Day. I miss Elliott so much. By now, he would have been nearly a year old and probably would have been hiking the Incline with me (in a baby backpack). He would, no doubt, be making that transition from needy baby to toddler, which seems like such a fun stage when their little personalities become more clear and you can interact with them a lot. I don’t know this by experience, but from what people have told me and the little I have observed with others.

I will be writing more about my son in future posts, as I was so looking forward to being his dad and taking him on adventures.

Regardless, I am so grateful to have been Elliott’s dad. He has helped me understand more about fatherhood, even though it was a brief brush with it for me. Though, here we go again, as my wife is now expecting another baby this summer, too. This time it is a daughter.

Happy Father’s Day everyone. May you honor your dad, grandpas, brothers and sons today. And hopefully you can get out and do some adventures together. 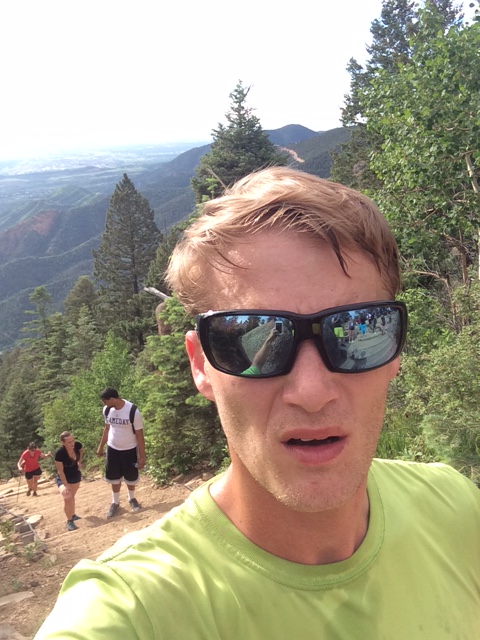 On top of the Incline, still feeling the suffering of the final push to the top.

3 thoughts on “Father’s Day on the Incline”