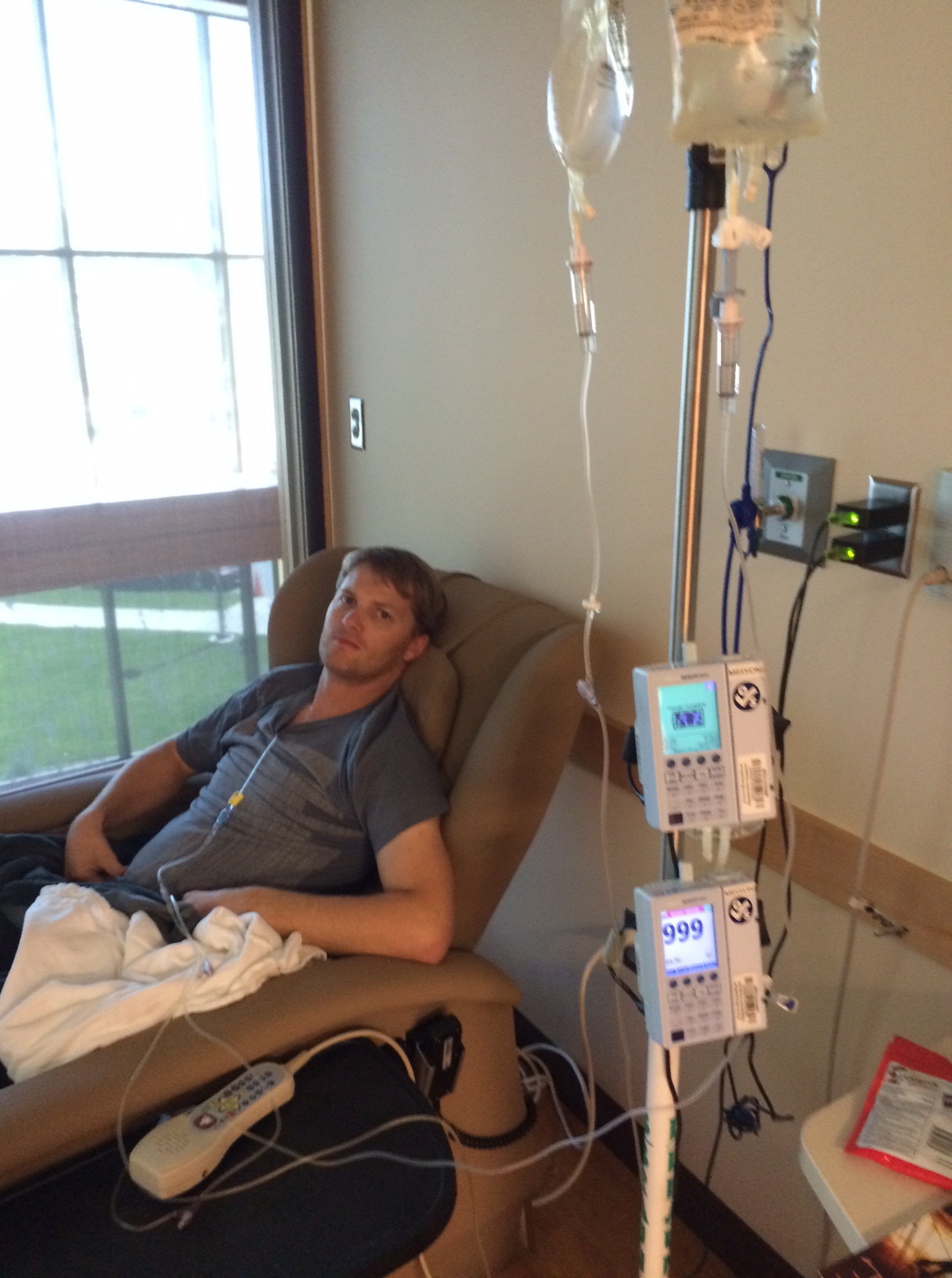 I finished my second round of chemotherapy this week.

Up until now, the thought of the c-word conjured images of drinking a nasty concoction akin to weed killer. How else would you explain the array of side effects? I mean, I might as well go buy some Miracle Grow and ingest that—at least I could drink the poison in my own time rather than go through the rigmarole at the hospital.

If it’s not clear, chemotherapy is the part of my cancer journey that I have least wanted to face. In reality, I have feared it. It seemed to make my cancer so “official.” Up until now, people have often told me, “Wow, you don’t look sick.” I liked that and wasn’t ready to give it up.

But, sooner or later I knew I would have to face chemo.

That’s how I found myself at the Avera Infusion Center on a Thursday afternoon. I pictured all of the patients organized in neat rows in a large room, like a bingo parlor. But here there are no prizes to win, though at Avera, each patient does get their own room, complete with a reclining chair and flat screen TV. I was thankful for the privacy and comfort.

Rather than having to drink chemo, they actually infuse it through an IV.

First they start with a liquid bag of anti nausea stuff, then saline, and finally the cisplatin (chemo.) Surprisingly, I could not taste or feel the solution. Yet after a few hours of the infusion, I began to feel bloated and uncomfortable. But not sick.

That came the next day. It started around noon. My stomach began feeling a bit unsettled and by dinnertime, I had absolutely no appetite and I felt like throwing up. Nausea is this heavy feeling that takes over your body, though directed through your stomach. You feel tired and unsettled and it can be accompanied by a bad taste in your mouth. The thought of food is revolting. The only way to feel better, other than for time to pass, is to lie down.

And once lying down, TV proved a nice distraction. Lucky for me there was a channel playing back-to-back James Bond movies. In between fitful naps, I watched parts of movies, including the The Spy Who Loved Me, where Bond skis through a beautiful Austrian powder field, only to be chased by several Soviet soldiers on skis.

There were plenty of other movies, too, including the classic, Goldfinger, whose villain is obsessed with all things gold. In my suffering slumber, sometimes it was difficult to differentiate between the movie and reality.

“Ah Mr. Lawrence, I too have a new toy,” says Goldfinger. “You are looking at an industrial laser. It can locate a spot on the moon, or at closer range, cut through solid metal.”

Tied to a chair, the laser began to inch its way toward my crotch, while I sat there sweating.

“Ok Goldfinger, you’ve made your point,” I say.

“Careful,” Goldfinger says. “Your next witty remark could be your last.”

Of course, I find a way to narrowly escape, and do away with Goldfinger. And thus goes the famous scene.

Unfortunately my nauseous haze continued for another day or two—long enough for me to catch more bits and pieces of Bond movies. In all, I watched saw four different actors playing the famous British agent— Roger Moore, Pierce Brosnan, Timothy Dalton and Sean Connery (my favorite). Though, by now I was getting rather bored of TV and kept hoping I’d feel better.
It turns out my sickness could have been avoided in part. I later found out I was taking too low a dose of Zofran, an anti nausea drug. I certainly paid a high price! The next week during my second round of chemo I got the Zofran dosage right and felt much better—good enough to even go watch one of my niece’s soccer games and go out for dinner.

And so maybe chemo is not quite as bad as I thought. If I stay on top of my meds, the nausea can be significantly reduced. And, as far as other side effects, my doctor said I probably won’t lose much hair (if any). I’m sure there could be other side effects, but none that I’ve noticed thus far.

Then again, we will see what happens when they add the other two parts of chemo, which includes immunotherapy.

Following my Double O Seven Binge, I took a break from TV for the next several days. Though, the movies did make an impression. I realized I was quoting a lot of lines, some obscure and some well known. When my wife asked me if I wanted some ice water to drink, I quipped: “Sure…but shaken, not stirred.”

Even without logging the view time I did, she easily caught the reference.

One thought on “Facing Chemotherapy”