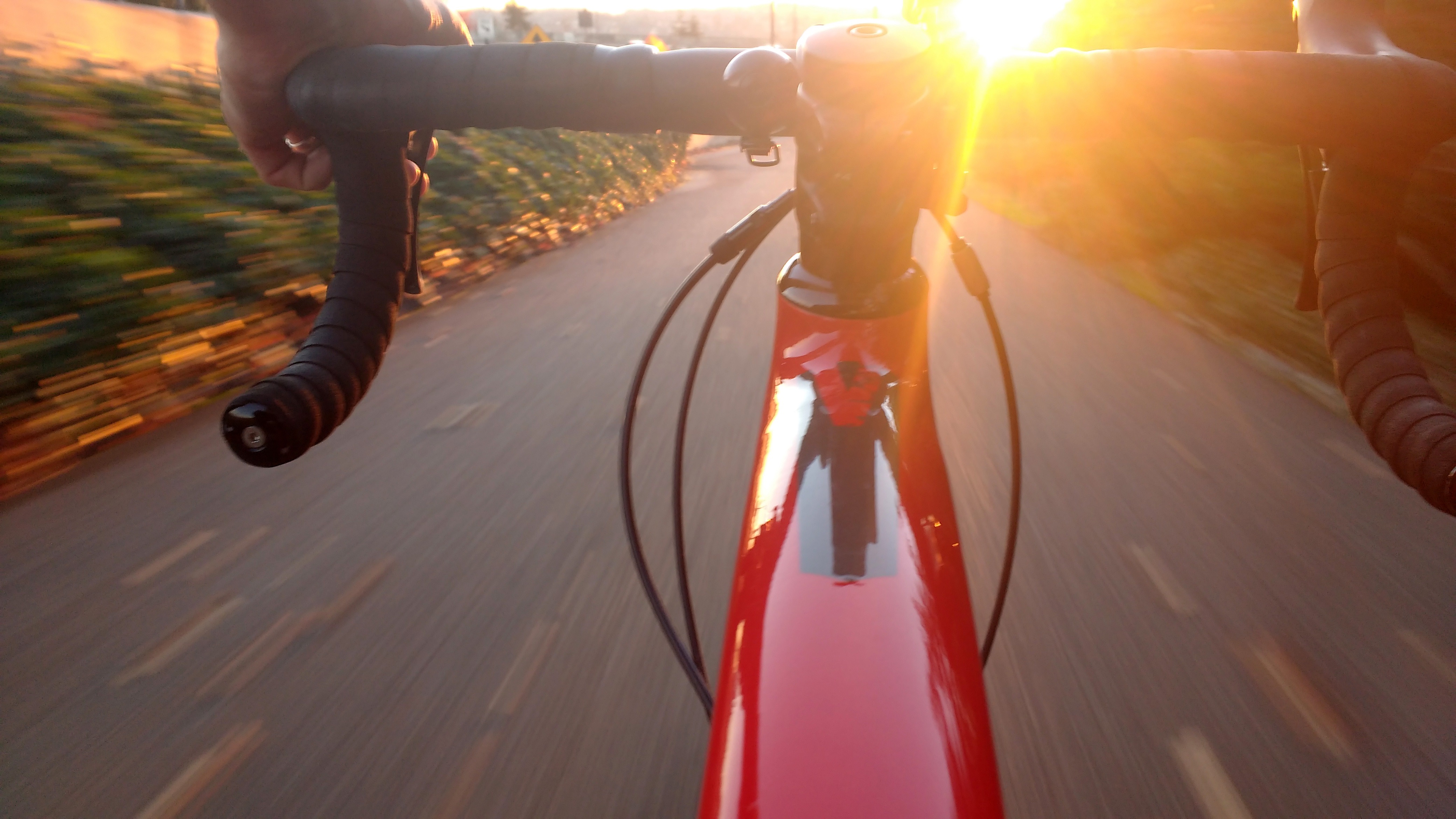 Getting a cancer scan can be like an unexpected collision, two moving objects smashing together violently and suddenly. You settle back into life but the digital images and doctor’s prognosis quickly jolt you back to reality like a triple strength energy drink.

Which is why when I approached scan number six or seven recently (I’ve lost count), I didn’t need to experience a literal collision, too, in the same week. That just seemed redundant.

So, here’s the story.

I decided to go on an evening bike ride, a few days prior, to enjoy the cooler temps and work on my conditioning. I remarked over the weekend how great I had been feeling—other than some lingering foot pain and fatigue, my body felt as good as it has in more than a year.

So, I reached for my roadbike, and started riding. As I peddled on 26th Street in Sioux Falls near McKennan Park, a vehicle turned abruptly into the lane behind me, lurking like a great white shark in the wave of my periphery. Following road biking protocol, I stayed to right of the lane, nearing the curb. I waited for them to pass, but instead they veered right—right for me! The vehicle’s fender tagged my bike’s handlebar, sending me summersaulting , somehow not under the vehicle’s axle. A split second before hitting concrete I thought, “Wow, this is going to be bad.”

As I sat there in a heap, dazed and disoriented, the vehicle kept speeding away. Another car pulled over, and asked if I was ok. I said, “I think so,” but urged them to call the police.

A cop, firetruck and even an ambulance came within minutes—quite an impressive showing from our friendly Sioux Falls first responders! I was pretty scraped up, growing more sore by the minute but unsure if I broke anything. I declined a ride in the ambulance. Honestly, I was worried that the words “cancer patient” would keep me overnight at the hospital, and I’ve had my fill of that.

Witnesses described the vehicle as a late model Chevy Traverse, or maybe a Dodge Durango, maroon in color. Yet this SUV Assassin escaped, and the police said with so little to go on, they would probably never catch them.

As this reality sunk in, I reassessed the damage: an abrasion on my shoulder, scraped wrist and elbow, and a heck-of-a-lot-of rib pain. Fortunately, I barely hit my head, though my dented helmet was now destined for replacement. My bike was no longer rideable, which was a bummer. 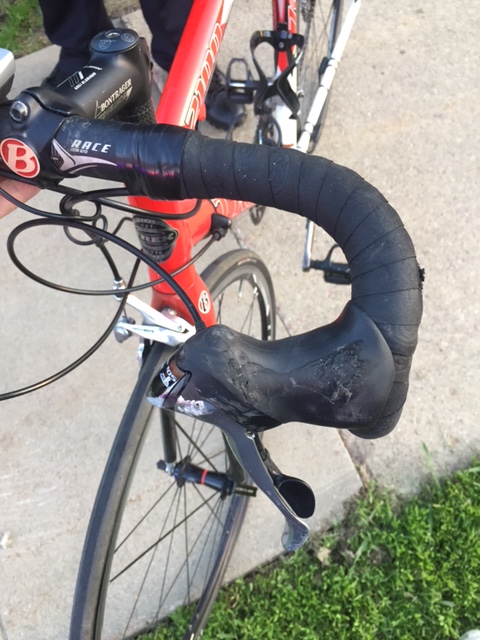 The next morning, I was so sore I could hardly move. The silver lining was I am well stocked with prescription painkillers, so sleep wasn’t too much of a problem.

Besides lingering physical effects, there were also psychological. Having someone hit and run me was unsettling, unthinkable even. Who runs away after they have clearly hit someone? Especially a cancer patient? I’m guessing they had something to hide—texting and driving, drinking or maybe the police were already looking for them. Maybe all three.

I like to think it was a scared teenager, or maybe even a sweet old lady, blissfully unaware. But I wanted to tell them: “Ah, that bump you just heard and felt, that was no raccoon. That was person!” 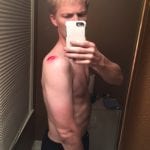 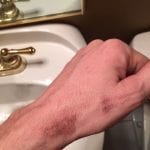 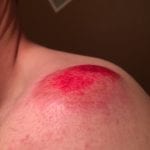 This is how my already-crappy scan week started. I still had the actual scan a few days later. As you may guess, if I wrote this much about the bike hit and run, clearly the report was good? Indeed.

As the doctor surveyed the images, he said everything continues to look “stable.” While they can’t say this because I don’t fit the textbook, I believe God has me in remission, and has for several months now.

Honestly, I expected this news, as it seemed consistent with where the Lord seemed to be taking things. But one never quite fully knows until you get the official word, right? 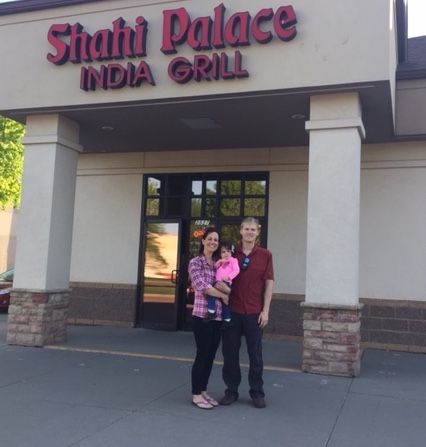 Elizabeth, Pippa and I wasted no time celebrating the good report, dining at our favorite local spot with my parents.

I will say this, getting the scan results quickly put my bike accident into perspective. It was more like a 3/10 on the scale of life trauma, compared to an “8” or “9” for stage IV cancer. It’s not that a hit and run isn’t traumatic, it all just depends on your scale.

So, what the heck was the bike collision all about? Honestly I have no idea. It was super random. I’m an experienced road biker, and have ridden a lot in urban settings, in places far more dangerous than Sioux Falls. In fact, I got into the sport when I lived in Florida, which is the most dangerous place to ride a bike in the U.S per governing.com. One of my buddies was hit and run twice there. South Dakota innocuously sits at number 38, with about 1/5 the accidents per capita compared to the Sunshine State.

However, my time in Florida was before the smartphone era. Today’s driver seems more distracted then ever. In my shock and anger, I wanted to generalize that people in South Dakota don’t watch for bicycles because it not as fitness minded as some states, but that was probably just residual PTSD talking.

One thing is for sure: coming back from cancer, only to be hit and killed on a bike seems like a lame ending to my story. So, I’m thankful that didn’t happen.

I’m also glad a quick doctor visit revealed that I did not break any bones. Shows me how far I’ve come, that my body is durable again after all the chemo. This pain is temporary, and will heal in a few more weeks. Hopefully even sooner.

All in all, I find the experience rather humbling and gratefulness-inducing. God has been so good to me and my family: the treatment he provided, our new house, not to mention my eternal redemption bought through Christ’s sacrifice. As Bill Murray said in the movie Caddyshack. “So, I got that going for me…which is nice.” As a believer, as one loved by God, I certainly have a lot going for me!

But maybe I was due for something unexplainable?I’m not sure. I don’t understand many of God’s ways, or why he allowed this crash, but I resolve to be content not knowing. I’ve reckoned much worse. The following verse seems appropriate: “God is in heavens and you are on earth, so let your words be few.” (Ecclesiastes 5:3b).

I don’t have to know or understand—just trust. So, on that note, I’ll take the good scan report and mostly-minor bike accident. These, too, were graces for me. Not to mention that the damage on my bike turned out to be minor—some scrapes and scratches, but a new tube and tires were all it took to make it usable again.

I think I’ll be even more thankful when my ribs stop aching. 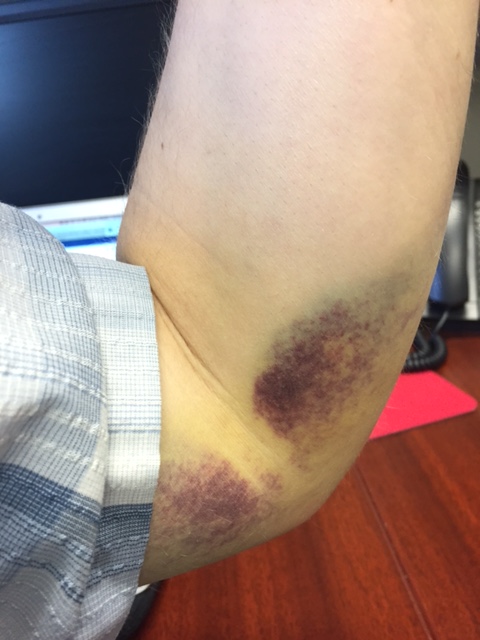 Some residual bruising on my left arm… 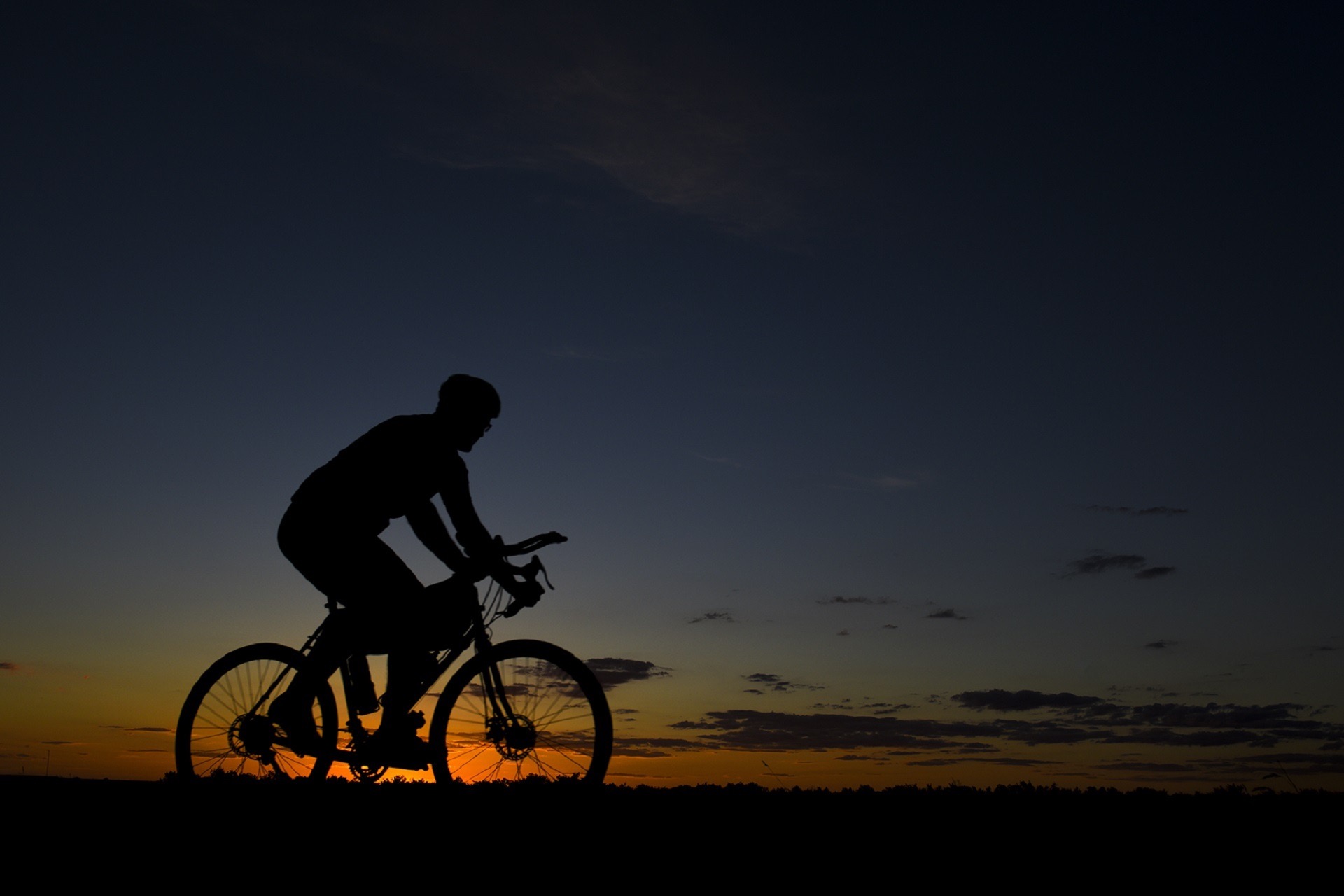 4 thoughts on “SUV Assassins and the Scan Collision”