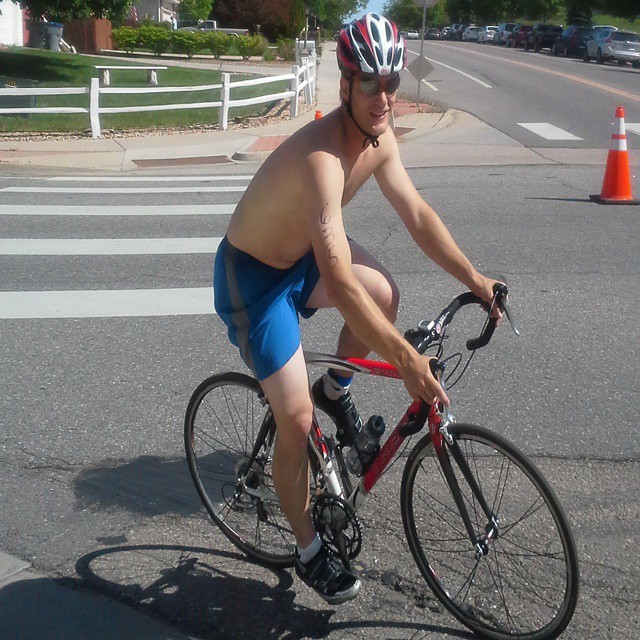 I felt rather relaxed as I waited for my heat to start on the edge of the pool. Donning obnoxiously bright caps, the swimmers churned the waters like a school of piranha—fast and chaotic. “OK” a girl nodded to me and two other swimmers, as we
plunged into the chlorinated waters. The start seemed casual, which was fine by me considering it had been eight years since I had competed in a triathlon.

When I heard about the 35th annual Longmont Sprint Triathlon, I couldn’t resist. Just five minutes from my house, I loved the chance to compete in something local. The race featured a 1/4 mile swim, 12 mile bike ride and 5k run. It sounded perfect for the sub-competitive triathlete.

Interestingly enough, the temperature by 9:00 a.m. was already near 80 degrees and sunny and humid. It reminded me of previous triathlons I competed in—when I lived in Florida. With no mountains, no rock climbing and especially no backcountry skiing nearby in Orlando, I needed a diversion. The most interesting part about Florida triathlons—other than raging humidity and heat—was the open water swim in a murky lake. Alligators swam in the same waters and I hoped I wouldn’t become easy prey if I lingered from the pack.

I felt like anything but prey working my American Crawl Stroke in the Longmont Centenniel pool. The clean and lukewarm waters felt safe—maybe too safe. As I splashed though the water, I tried to hold back. I knew better than to push too hard, as the swim is not my strong suit.

I moved into the transition area at 10:05. When I pulled my bike out of the rack, it collapsed, knocking another competitor’s bike over. It probably cost me a good 20 seconds trying to balance it again (not to mention the fluster factor) before a spectator offered to take care of it. If people win or lose triathlons based on transitions, my race already wasn’t looking good.

The bike portion featured 3 laps around a 4 mile loop, which was decently hilly. Because of my projected swim time, I started in a later heat and was doing a lot more passing than getting passed. Only one rider squeaked by.

The transition from bike to run always feels a bit weird—your legs and lungs are tired, but yet your running muscles are still relatively fresh. I started a bit slow and then eventually settled into a 7:30 pace—not my fastest, but not slow either. The run through cul-de-sacs and sidewalks was rather uneventful, though I mustered pretty good kick to the finish line.

All in all, the race felt pretty good. I always love the race day vibe, which is a sure way to help you perform at speeds you would seldom reach in training. In the end my time was good enough for second place my age group. I was pretty happy with that considering this age group is supposed to be one of the most challenging. The ahead guy ahead of me in my age group beat me pretty handily and got fifth overall. I got 28th place of 230.

In the end, it was a pretty fun morning. It was great to feel the race high and also hobnob with some of the other athletes,   including a guy named Bob who has won the race in previous years. Even though I am juggling too many outdoor interests, maybe I will do more triathlons? At the very least, I’d do this race again in Longmont. 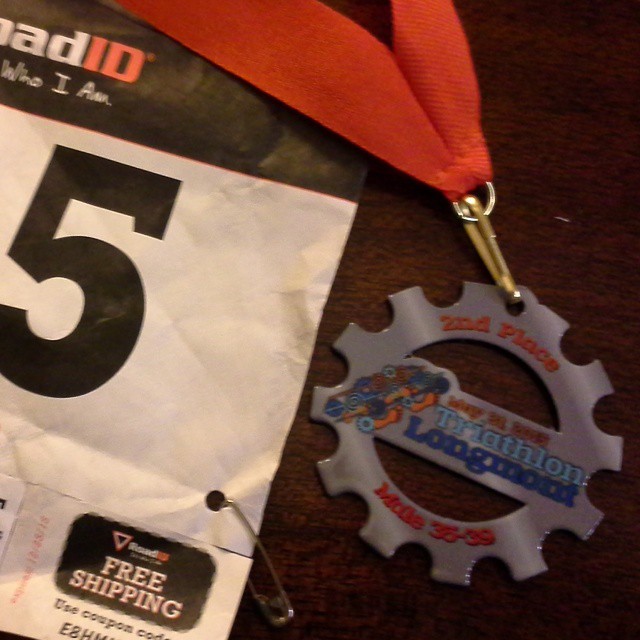