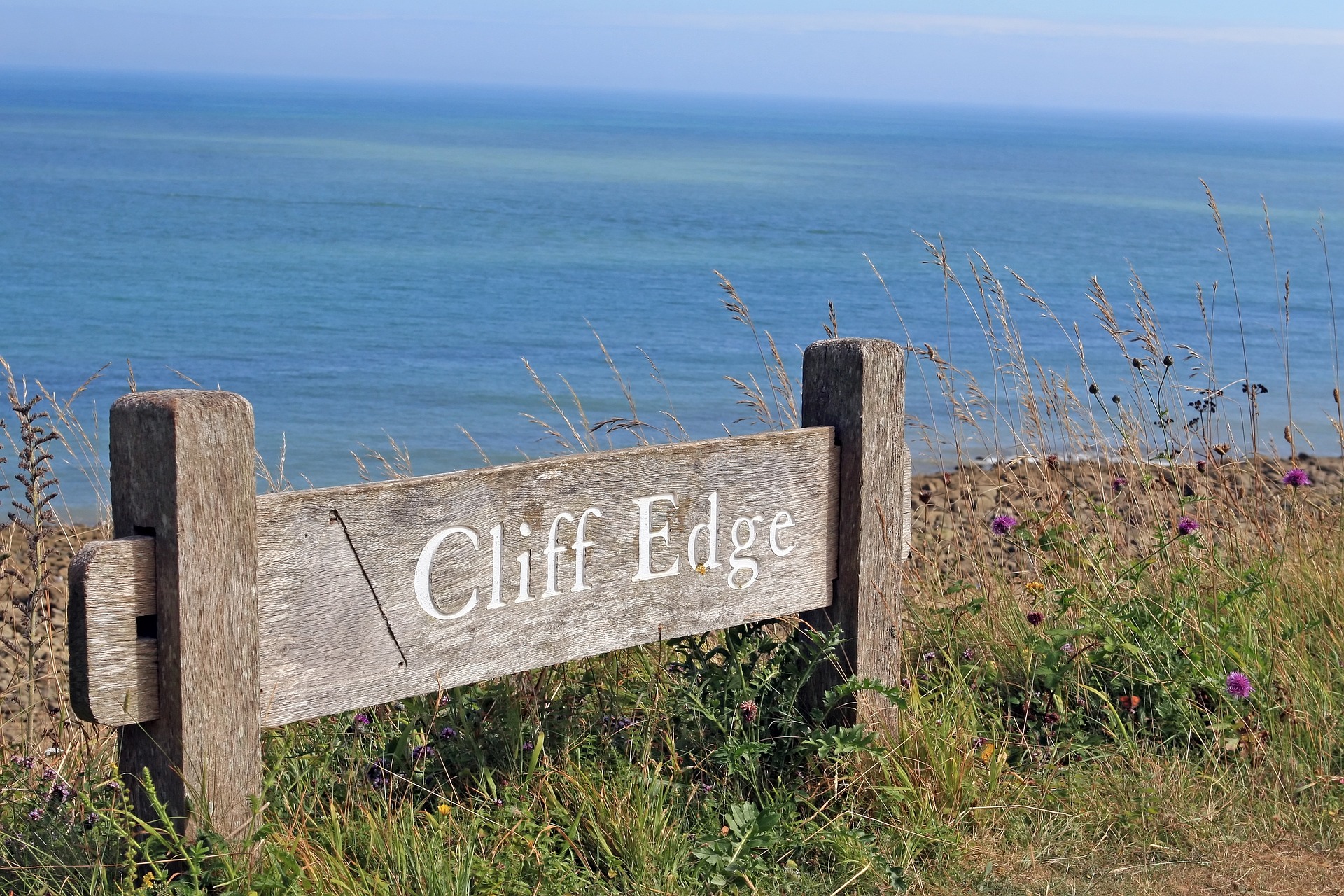 One of the worst aspects of dealing with cancer is the scans. Are things stable, in remission or is the cancer advancing?

Approaching a scan is like preparing to leap off a very large cliff—kind of like the 80-foot cliff in Blue Mesa Reservoir in Colorado that I once hucked off. I was much younger and dumber then, but I still remember the nerves and adrenalin.

But honestly comparing scans to any outdoor adventure fails to fully capture the experience. There is no “fun” thrill in scans or cancer.

Like many patients, I get scans every three months. Last week, I underwent another one, and the news was quite good. I will explain more in a bit, but let me first elaborate on more of the scan-to-scan experience. 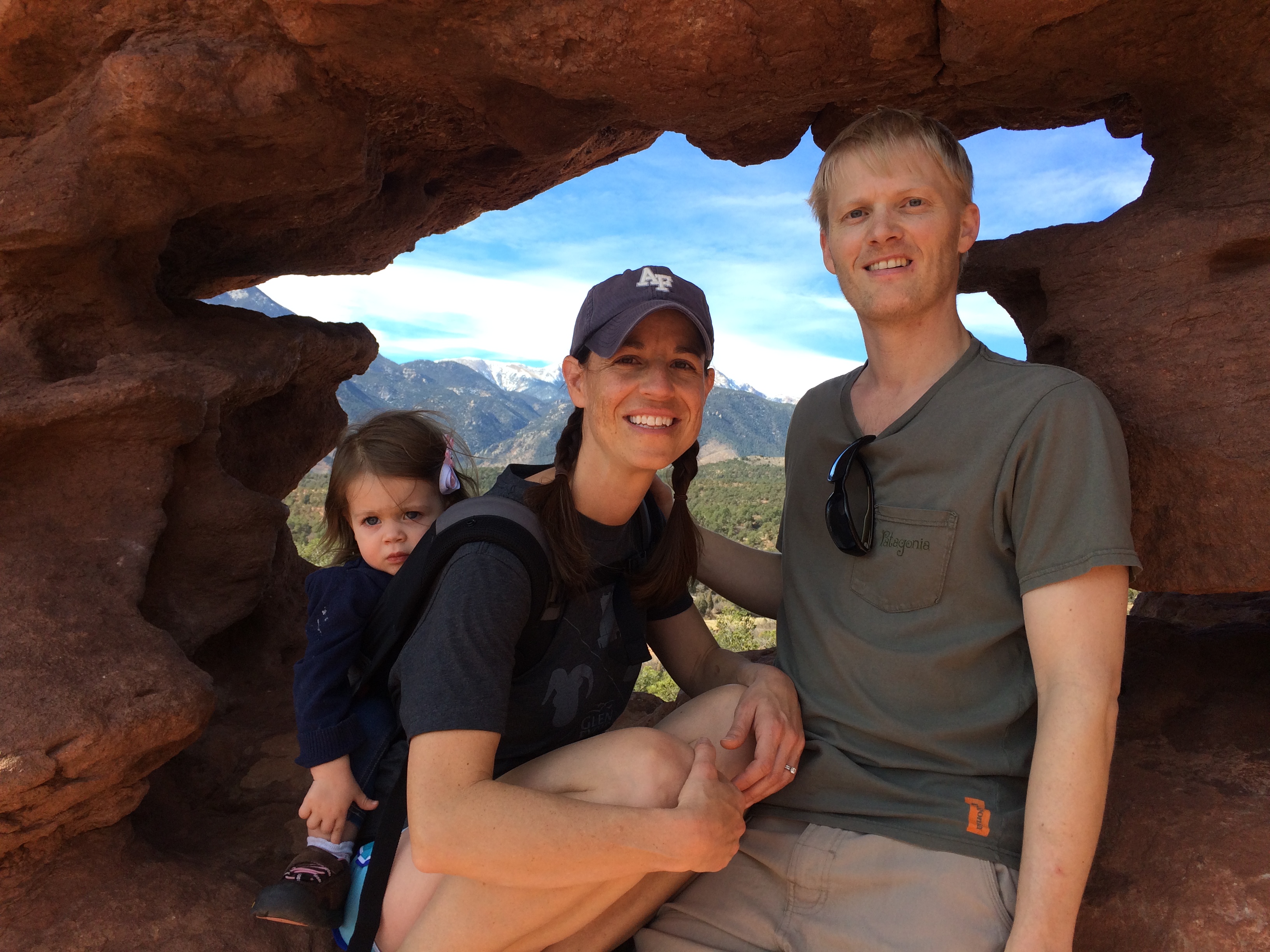 A familiar view of Pike’s Peak through Siamese Twins in Garden of the Gods State Park.

So far, I have had four scans, and the days leading up to them have all been nerve wracking to varying degrees. We literally hang on the words of what the doctor says—and the delivery matters. Waiting for the news is like being on trial—sitting in the courtroom, while the judge and jury dispassionately share the verdict on your life. You know the following words will have massive implications—whether for good or bad.

The days and weeks leading up to them, Elizabeth and I wear the stress like an overinflated air mattress—tight, pressured and pumped full of air. As we get closer to the day, we vacillate between extreme fear and hope, and often land in an odd mix of the two. Once we finally get the news, we decompress for several days, maybe even weeks, and try to return to some normalcy. Over time, I feel like that faded mattress in the corner by the pool: no longer able to hold the air it once did.

Friends of mine who have been through similar journeys have confirmed this same experience.

I haven’t always been the best about reporting my scan news on this blog—probably in large part because of the emotional toll it exacts. I tell the people around me afterward, but I often don’t have to the energy to report it to a wider audience for awhile.

Somehow the Lord is with us in this process. Elizabeth and I often get frustrated by our overwhelming fear and lack of faith—with every scan—but I tell her it is just part of being human.

And what is it that I fear? It seems like an obvious question yielding an obvious answer. But in short, I fear death—not being here. I know my hope of life with Jesus is secure, but still I fear news that will rip me away from my loving wife and precious daughter, who I could never imagine living without. I fear that my hope of recovery will be irrevocably stamped out, that even my faith and belief in God’s goodness—sometimes strong, often weak—will take a hit I can’t recover from. And in that way, I lose what means the most.

Even when I feel fairly confident going into a scan, there is always that gnawing feeling in the back of my mind—what if? The unexpected. This thing could go completely south—the cancer returns with a fury.

Thus far, that has not happened. My situation has  improved with each scan. But the fear of the unknown continues to haunt me. 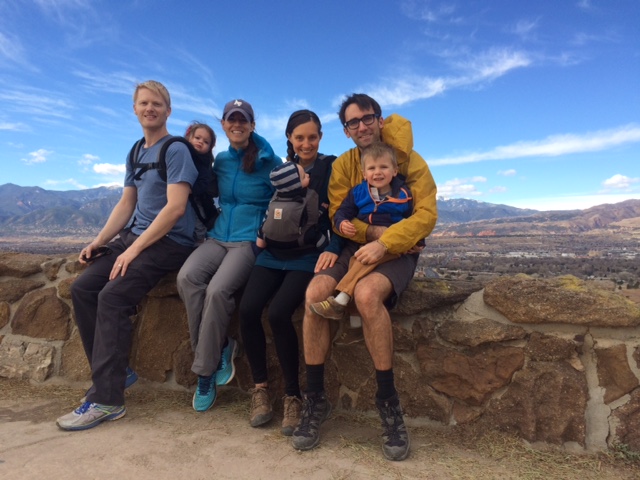 We hiked with one of our favorite Colorado Springs couples and kids on Saturday. It was an epic day.

Oddly enough, when we approached the scan last week, it was the easiest by far. In fact, the day before we kept forgetting the scan was the next day. Part of it was that we had gotten the genomic blood test ahead of time, which again was 100% clear, indicating that I still have no cancer in my bloodstream. But we had gotten similar news ahead of other scans, too.

There was more to it.Elizabeth felt like God told her that the several months would be about “rest”—and somehow we felt much more at peace. Another reason was that during my unexpected hospitalization in Florida, they did a partial scan and my liver looked the same. We still could have worried about potential bad news, but we didn’t. God just helped us, and that is best way I can explain it.

I even scheduled a flight the afternoon of the scan, so I could attend a work conference in Colorado. In some ways, buying a ticket seemed stupid because if I had gotten bad news, there would have been no way I could have functioned well professionally. We may have had to cancel the trip and eat the cost. But by God’s grace, the news was good.

When we met with our doctor, he said that everything is still “stable,” meaning the cancer has not advanced, nor has anything changed since November. It still appears “dead.” This is the best-case scenario. However, it is difficult to fully know what’s going on inside the tumors, which is why my doctors will be taking the next step of treatment, which is Y90, an outpatient procedure of injectable radiation. It’s a little involved to explain it, so I’ll save that for another time. This is all good news, and hope of cancer eradication is very much alive, though I am realizing the journey is long—much longer than I ever thought it would be.

Meanwhile, I have been feeling great. The two-day work conference in Breckenridge was a huge boost both professionally and relationally. This was the first Lifelines activity we had attended in nearly 10 months, and there was much business to cover.  Relationally the time was rewarding. One of the evenings, we sat around the huge stone fireplace, and our team asked Elizabeth and I to share what the past several months have been like—the highs, the lows, the fear, the uncertainty, and especially the rediscovery of hope. We have a lot to be thankful for, and we are quick to share it. Our friends asked us questions and then prayed for us.

It all sounds simple, but the meaning for us was profound. There is something about a crazy journey that isolates you from people. When friends take the time to listen, to seek to understand—it is so powerful. We know that it is impossible to actually walk in another person’s moccasins—or with cancer, to know what it’s like to get an infusion, or radiation, or continue to take drugs with side effects, to endure sleepless nights. It would be impossible to understand that without experiencing it.

But seeking to understand is powerful, and it is enough. It is the effort of just being with someone—letting them know that they are not alone, despite the darkest valley they walk through. That’s what our Lifelines friends did for us. And besides all of the work stuff we accomplished, this was their gift to us. Not to mention that all of the interactions felt so “normal,” like we just picked up where we left off, which was also encouraging.

I realize that most everyone reading this doesn’t live scan-to-scan. But most likely you know someone who does. I hope this post sheds more light on what that experience is like, so you can pray for them. And besides praying, don’t forget just how powerful it can be just to seek to understand their journey. You probably won’t grasp it fully, but you don’t need to. Just the effort of trying will be a balm for their weary souls.

On a lighter note, after the conference, Elizabeth and I also spent a weekend in Colorado Springs with family and friends. We soaked up the warm sun like geckos—Friday was 77 degrees!

On Saturday, we went on two hikes, in the morning at Palmer Park and in the afternoon at Garden of the Gods. It felt gluttonous—like eating that second sprinkled donut you couldn’t take your eyes off. Of course, for me outdoor indulgences usually involve lots of ski turns, but all in due time. 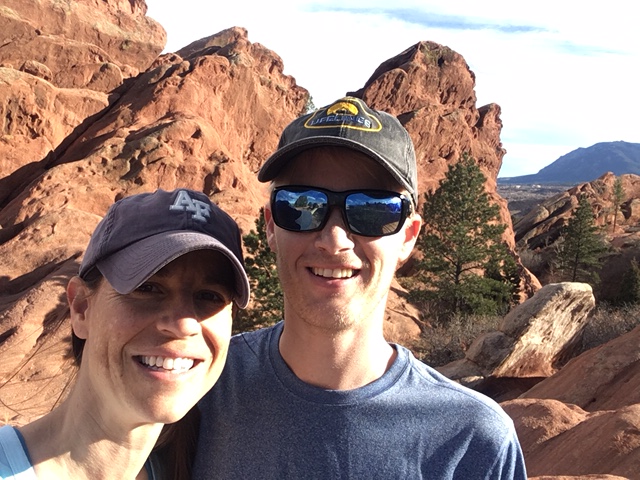 Hiking in a less familiar part of Garden of the Gods. The slightly overhanging wall on the back right is, to my knowledge, unclimbed and unexplored. It should be. 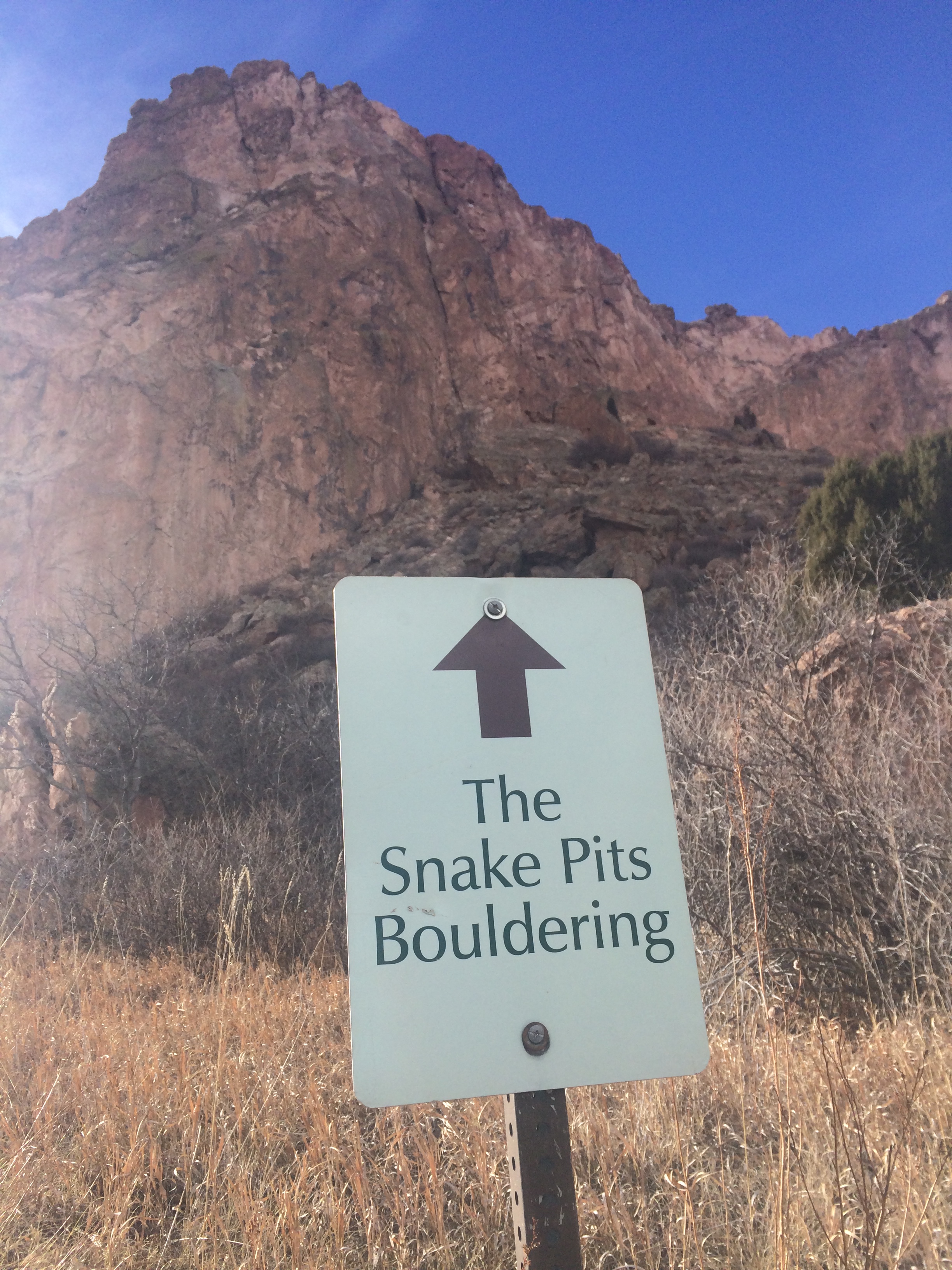 I braved some light bouldering at one of my favorite I’m-short-on-time-but-still-want-to-climb spots. My snake-dar was running on full alert—in light of the name—but to this day, I have never seen any bogeys at the Snake Pits. 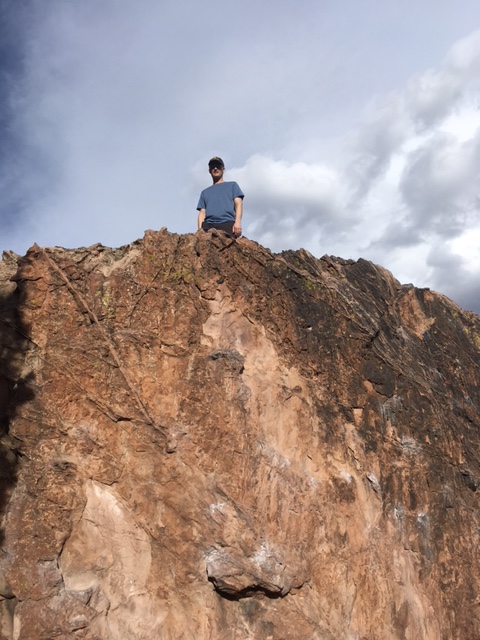 On top of The Main Snake Pits Boulder 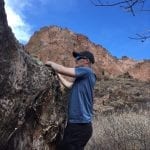 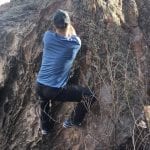 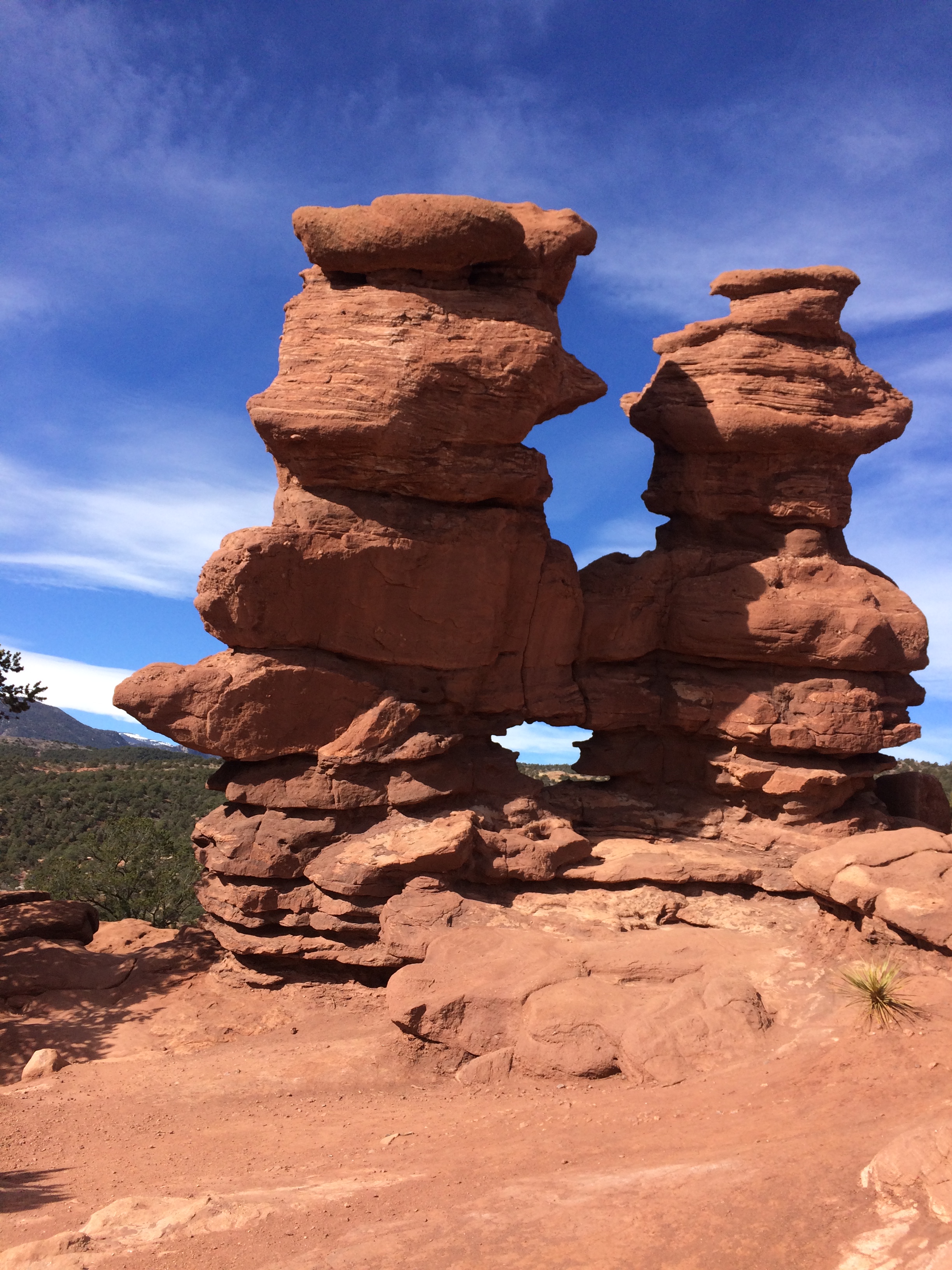 Another look at the Siamese Twins.

6 thoughts on “Living Scan to Scan”